PRAISE Report: “I Had Cancer, Was Given 2 Months To Live, But God Healed Me’ – Yvonne 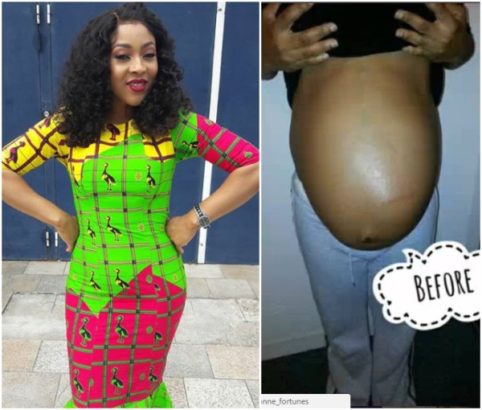 A Nigerian lady and Instagram user identified as Yvonne Ebadan Ogbefua, has recounted how she was miraculously healed by God of Sacorma, a form of cancer that attacks the soft tissue which knocked her down.

According to her who also celebrated her birthday, she was given just two months to live, but after the words of her Father in the Lord Bishop David Oyedepo came to her heart; ‘WHAT EVER MY GOD CANNOT DO,LET IT BE UNDONE’, she believed and got her healing.

“Happy birthday to me.its my testimony. Roughly four years ago,I was diagnosed with a form of cancer that attacks the soft tissue.its called sacorma.it started as a very small lump just by my right side in my stomach region.i was on drugs,but it grew by the day.Then chemotherapy was introduced. This treatment was said to be an aggressive form of treating cancer.but instead, I will say, it fed this,and made me weak.Then the dosage was increased.my oh my!! I became too weak to even stand or sit.Was I praying all these while?yes! To the intent I taught God has gone on vacation. 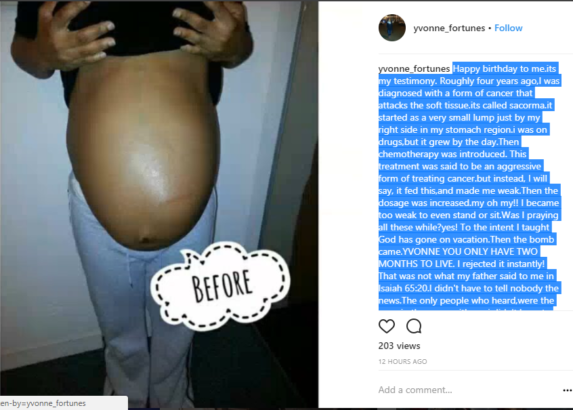 Then the bomb came.YVONNE YOU ONLY HAVE TWO MONTHS TO LIVE. I rejected it instantly! That was not what my father said to me in Isaiah 65:20.I didn’t have to tell nobody the news.The only people who heard,were the ones in the room with me.i didn’t have to cry over it, cause it wasn’t even my portion. Then, my elder sis called me one day.she said something that I will never forget.she said you’re still relying on medicine Yvonne,until you make God your only source of help,you won’t move him.That night I knelt down and cried,I said Lord,have mercy on me.medicine has failed me.Then the words of my Father in the Lord Bishop David Oyedepo came to my heart.WHAT EVER MY GOD CANNOT DO,LET IT BE UNDONE.I put my” WHOLE”trust on him.

Hallelujah Jesus the master healer showed up for me.now listen.After I praised him,and dance so much in my heart cause I could barely do it physically,I received a message from the head surgeon in France telling me they could now operate .less I forget,she once said the operation was impossible cause the tumor has grown so big and I was 2 weak.Tumor weighted 7kg.12 doctors,10hrs of operation.Jesus gets the praise.Now to the interesting part! My 6mons follow up,on seeing this same doctor,while reading my file.she said,THIS IS NOT POSSIBLE!!! who did this operation?Surprised me,i looked around to be sure she was referring to me,cause I was in her office with her secretary and her.25 cm? she was corrected by her secretary 32cm.she screamed Wow!! Who did u say did this? In my heart I shouted Jesus did! One year six months of been sick, was like 16 years. PT 1″