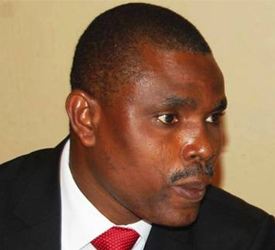 President Buhari has sacked the head of the Financial Reporting Council of Nigeria, FRCN, Jim Obazee pictured above, after the council enforced a law that led to the exit of Pastor E.A Adeboye as the General Overseer of RCCG in Nigeria on Saturday January 7th.

Pastor Adeboye during the church’s Ministers thanksgiving, announced his retirement as the General Overseer of the church only in Nigeria following a new law that disallows leaders of a non-profit organization, churches inclusive, to remain in office for more than 20 years.

Although the law was enacted in 2011, it had not been implemented by any administration. Obazee is said to have had a clash with the Minister of Industry, Trade and Investment, Okechukwu Enelemah, after he went ahead with the enforcement of the law despite the minister’s position that the law should not be enforced.

The sack of the council boss is contained in a statement signed by Shehu Garba..

President Muhammadu Buhari has approved the immediate removal and the replacement of the Executive Secretary and the reconstitution of the board of the Financial Reporting Council of Nigeria (FRN). He has appointed a Chairman and a new Executive Secretary for the council. The new Council as approved by the President has Mr Adedotun Sulaiman, MFR as Chairman. Mr. Sulaiman was a former Managing Partner/Director of Arthur Anderson and later, Accenture. He is a Chartered Accountant and a product of the University of Lagos and Harvard Business School. The President has also approved the appointment of Mr. Daniel Asapokhai as the Executive Secretary of the Council. Mr. Asopokhai is a partner and a Financial Reporting Specialist at the PricewaterHouseCoopers (PWC), Nigeria. He is a product of the University of Lagos and the University of Pretoria. President Muhammadu Buhari has also instructed the Minister of Industry, Trade, and Investment to invite the nineteen ministries, departments and agencies of the Federal Government and private sector organizations specified in the FRC Act to nominate members of the board of the council.