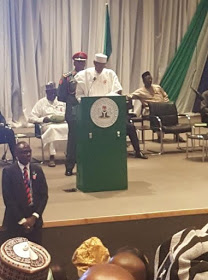 President Buhari has expressed optimism that the current economic recession will end in 2017. He said this while declaring open an induction course organised by the Ministry of Foreign Affairs for the 46 Career Ambassadors-designate recently screened and confirmed by the Senate in Abuja yesterday.

“We are optimistic that the external factors that partly contributed to push our economy into recession will ebb in 2017.
Until then, I regret that the resources available to fund our missions abroad will not be as robust as we would like. We are working hard to turn around our national economy by effectively reforming our macroeconomic environment through measures, some of which were outlined in my budget speech to the National Assembly last week”he said