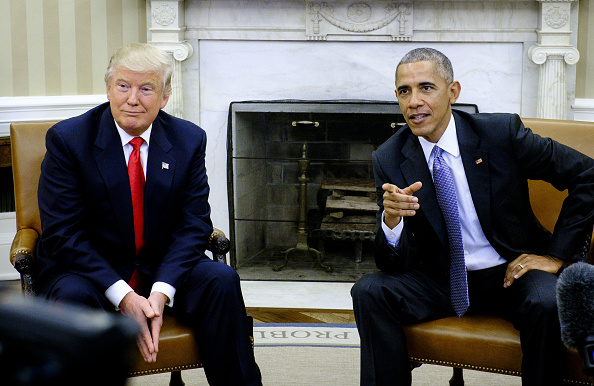 U.S. President Barack Obama, right, speaks as U.S. President-elect Donald Trump listens during a news conference in the Oval Office of the White House in Washington, D.C., U.S., on Thursday, Nov. 10, 2016. Obama on Thursday met face-to-face with Trump, who spent years questioning the eligibility of the first black U.S. president and now will succeed him.

U.S. president-elect, Donald Trump has said he “very much looks forward” to seeking counsel from President Barack Obama as he prepares to enter the White House.

He made this known when he met with Obama on Thursday in the Oval Office, calling the meeting a “great honor”.

Trump, noting he had never met Obama, calls him a good man and said that they had discussed both “wonderful” things and the “difficult” challenges the country faces.

After a nearly 90 minute meeting in the Oval Office, Obama said they discussed organisational issues related to the presidential transition as well as foreign and domestic policy.

“My number one priority in the coming two months is to try to facilitate a transition that ensures our president-elect is successful,’’ he said.

According to Obama, he feels “encouraged” by his White House conversation with president-elect Donald Trump.

“I have been very encouraged by the interest in president-elect Trump in wanting to work with my team around many of the issues that this great country faces. I believe that it is important for all of us regardless of party and regardless of political preference to now come together to deal with the many challenges we face,’’ Obama said.