Prophecies For 2017 By Pastor Chris Oyakhilome 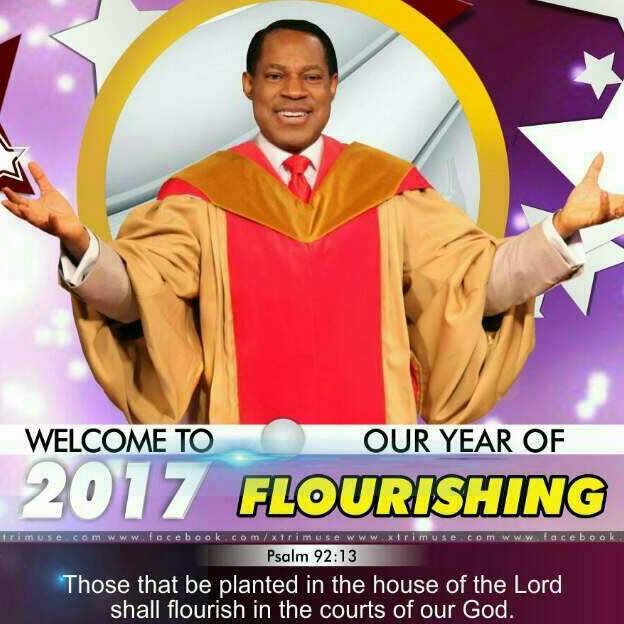 The Man of God, Rev. Dr Christian Oyakhilome announced by the Spirit to the BLW Nation a.k.a Christ Embassy the Year 2017 to be the Year of Flourishing……..Psalm 92:13

He sighted various nuggets for this Year
1.The Year of Luxuriant growth

3.The Year of Persistent productivity.

He pointed out this Year to be a Year of flourishing for all,He compared the flourishing to that of a palm tree which flourishes and grows irrespective of whatever season it is,postulating that the flourishing is in the palm tree and not in its environment.
The word was received with joy from the more than 1 Billion Viewers worldwide who connected through all satelite means to be a part of the Yearly meeting.

BELOW are some of the Prophecies released by the Man of God for the Year 2017:

1.The Man of God said this Year has been seen from recent years and also the present time of the age,He said wickedness is on the high rise, that even Al-Qaeeda had to disassociate itself from ISIS due to the very nefarious acts committed by the terrorist groups,the Man of God said but this Year,God has decided to equip His kids more to be able to win more souls to God’s Kingdom……………He said this Year is full of many notable personalities being won to God.

2.The Man of God said this Year was going to see God’s Children come out nourished even in the midst of seemingly difficult times.

Though the Man of God could have been seen to talk from the angle of great exploits of the Saints this Year,it could be well noted that He points out that there would be more wickedness this Year as been seen in the World but God’s kids who are the light of the world would be more equipped by God and shine by quenching every iota of wickedness.