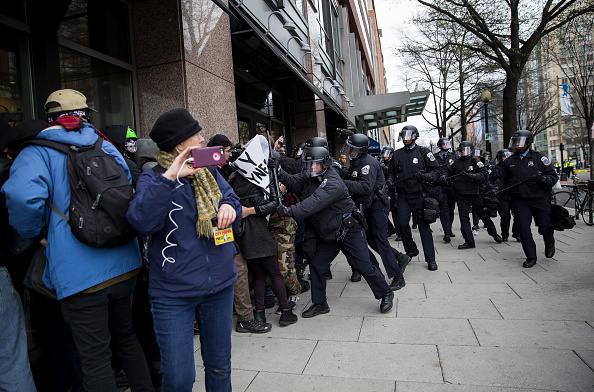 Police officers corral demonstrators during a protest at the 58th presidential inauguration in Washington, D.C., U.S., on Friday, Jan. 20, 2017. Donald Trump became the 45th president of the United States today, in a celebration of American unity for a country that is anything but unified.

A group of protesters blocked security checkpoints  entrance at 19th and E streets in downtown Washington D.C. on Friday to protest against the inauguration of Donald Trump as the 45th President of the U.S.

Some women tied themselves together with purple yarn and sat on the ground, blocking access to those trying to get through the security line at the inauguration venue at Capitol Hill, according to reports.

With signs, brass instruments and large wooden crosses, some of them danced, blew whistles and sang.

Police in the area kept at least one lane open to allow a few people to get through the checkpoint.

Those who made it past the protesters appeared unfazed.

Some demonstrators covered their faces with bandannas and told those going through, “you don’t want to go in there”.

Several anti-Trump protests were also popping up on Friday morning throughout the city.

At 14th and I streets NW, several anti Trump marchers chanted, “Whose streets? Our streets!”

One man carried a bundle of American flags over his shoulder.

“It’s not enough to continue shouting into the echo chamber of social media. We’re here to actually put our bodies on the line in support of our friends who are going to be targeted by this regime,” said Clara Mystif, 31, a writer from Florida.

At Seventh Street and Independence Avenue SW, a security checkpoint there was shut down for 10 minutes because of protests but had since reopened, police said.

During the inauguration, black-clad activists smashed store windows, blocked traffic and fought with police in riot gear who responded with tear gas and stun grenades.

Reuters reports that about 500 people, some wearing masks, marched through the city’s downtown, using hammers to claw up chunks of pavement to smash the windows of a Bank of America branch and a McDonald‘s outlet, all symbols of the American capitalist system.

Police detained dozens of people and said they had charged an unspecified number of people with rioting. According to CNN, 90 persons were arrested.

As soon as Trump was sworn in, a crowd of several hundred formed to call for their release turned violent, with some throwing bottles and rocks at police, who responded with tear gas and stun grenades.