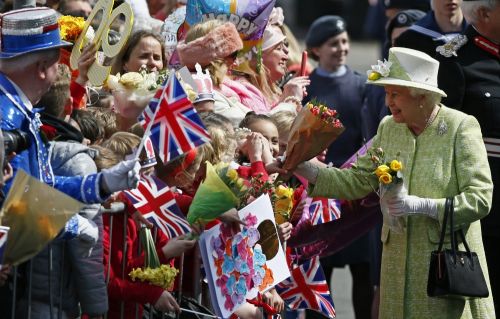 Crowds across Britain have gathered on
Thursday to celebrate the 90th birthday of
Queen Elizabeth II, the oldest monarch in the
world, who has often spoken out about her
strong Christian faith and how central
following Jesus Christ is in her life.

Prime Minister David Cameron called her “a rock
of strength for our nation,” Reuters reports. And close to 1,000 beacons will be lit later in
the day to celebrate the occasion.

“All of us are here to respect the queen and to
show her our affection and how much we
appreciate all her years of service and to wish
her a happy birthday,” said Donna Werner who
traveled to the queen’s Windsor Castle home,
west of London, all the way from Connecticut to pay her respects.

Cameron added: “Rarely has anyone in public
life served for so long, served so brilliantly,
worked so hard, and brought so many people
together.”

BBC News magazine listed on Wednesday several different reasons for why Elizabeth has
been able to live such a long and productive
life, noting that her Christian faith and
charitable works have played a key role.

“It could be that religious faith, especially in the
West, comes with a community and support
network. On the other hand faith may make
you feel more positive about life and death.
Studies have found that optimists live longer
than pessimists,” said professor Sarah Harper, from the Oxford Institute of Population Ageing.

In her forward to The Servant Queen and the
King She Serves, the book marking her 90th
birthday, Elizabeth wrote: “I have been — and remain — very grateful to you for your prayers
and to God for his steadfast love.”

She added: “I have indeed seen His
faithfulness.”

Mark Greene, executive director of the London
Institute for Contemporary Christianity, who
co-authored the book, added at the time: “The
Queen has served us all her adult life, with
amazing consistency of character, concern for
others and a clear dependence on Christ. The more I’ve read what she’s written and talked to
people who know her, the clearer that is.”

Elizabeth’s marriage to Prince Philip, Duke of
Edinburgh, was also an important factor cited
by the BBC for her longevity. The monarchs
were married in November 1947 at
Westminster Abbey in London, and have
stayed together for 68 years.

Back in 2012 during her Diamond Jubilee
celebrations, Elizabeth called Philip her
“constant strength and guide.”

Dickie Arbiter, her former press secretary, said,
“she has a strong marriage. There has only
been one man in her life and that’s Philip.”

Elizabeth also remains popular among the
British people, with an Ipsos MORI poll last
week finding that 70 percent of respondents
want her to stay on as queen, while a separate
BMG survey for the London Evening Standard
newspaper found that 66 percent of citizens had a favorable view of her, and only 10 held a
negative opinion.