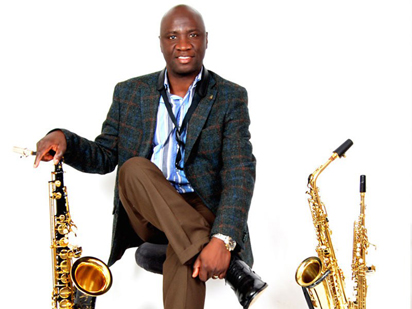 UK- based Nigerian gospel musician, Peter Adeshile a.k.a Kakaki Jesu is a new discovery making waves in the gospel music circle. His dexterity with saxophone and trumpet earned him the pet name ‘Kakaki’ the Trumpeter.

Kakaki-Jesu
The Oyo State-born musician is doing so well in England where he plays his Afro highlife gospel, laced with saxophone and trumpet.

He revealed to Sidebeat recently how he began his journey into the world of gospel music. He also talked the secret behind the name ‘Kakaki Jesu’.

Music, according to him, has been an integral part of his being.

He said: “I started it professionally when I arrived in the UK from Nigeria. I began by going round playing at church engagements. ‘

‘Before then, I was a member of the boy’s brigade in my community in Lagos as a teenager. In this club everyone plays as many instruments as possible and for that, I started with the drums and then moved on to the trumpet. I was actually influenced by Debo Norman-Williams, my mentor in the Boys Brigade who taught me most of the instruments.

“I performed credibly well in trumpet and that earned me the nick name ‘Kakaki’ among my peers, meaning the Trumpet. In UK, a certain sister in the church by name Susan Odushola equally inspired the urge to take up Saxophone as a special instrument saying I could be of help to the church if I play the saxophone aside the trumpet. I did and perfected it so well through the help of a friend in Nigeria by name Biodun Adeoye. Biodun was the baritone and saxophone player for Femi Kuti’s band.

“Music has come to stay in my life after shelving other careers. My choice of music –gospel is influenced by my love for God. This is because I grew up in the Christian community. When you look at what is going on in the Diaspora today, it seems the end time is near and I feel it is time to accept Christ and propagate the gospel through music. I was also inspired by the likes of these gospel musicians – Kirk Whalum, Ron Brown, Rick Braun, Charlie Parker and late Fela Kuti.”

Kakaki Jesu whose debut song called ‘Amazing Grace’ done on saxophone and doing so well in the market is assiduously working on his second album which is titled ‘Afro according to Gospel’. The yet to be released album has 8 tracks with the first song titled ‘Accept Christ’ done in full Afro format