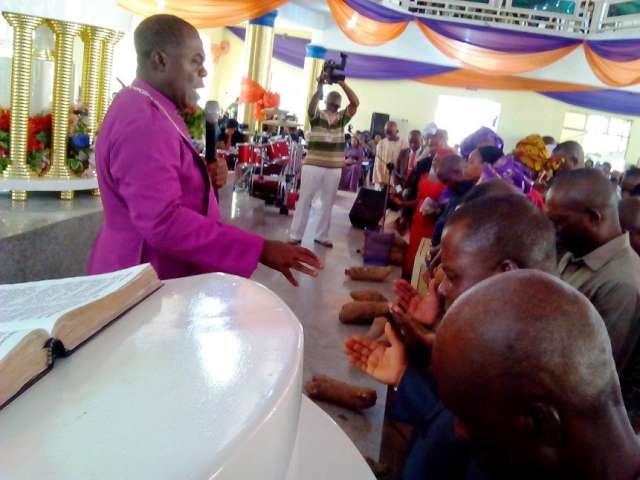 Dr Ngozi Durueke, a Pentecostal Bishop, has called on religious organisations to establish commercial agriculture ventures to tackle hunger and unemployment in the country.

Durueke said that food insecurity and rising unemployment were the major factors causing the current economic recession in the country, saying, all and sundry must collaborate to tackle the problem.

Durueke, the founder and bishop of He Reigns Chapel Power-line Living Ministries International Owerri, spoke in an interview with the News Agency of Nigeria (NAN) on Sunday in Owerri.

“Religious organisations should for now suspend the construction of cathedrals and big churches and establish big farms to assist in providing food and jobs to Nigerians.

“Rather than task members of your church to raise money for construction of cathedrals, and big churches, mega livestock ventures and farms to employ jobless people and provide food for the hungry should be established,’’ the cleric said.

Durueke, a varsity don turned clergy man added that survival from economic recession must not be left for government and the private sector alone.

According to him, religious bodies should also begin to think of economic growth and not only spiritual growth.

“All I am saying is that we should have community churches where the interest of the community where the church is located is fused into soul- winning mission of the church,’’ he said.

The cleric urged ministers of God to send more of holiness messages, and avoid prosperity messages which according to him promoted corruption and inordinate ambition.

“If men of God should emphasise on holiness, rather than prosperity, it will discourage corruption,
anti-social behaviour and criminality among Nigerians,’’ he said.

The cleric advised Nigerians to check ostentatious lifestyles, adding that it was regrettable that Nigerians were globally known for ostentatious living in spite of being rated high in unemployment.

“Nigerians should stop buying luxurious items, expensive cars, and building of mansions; let these millions of Naira wasted on these items be re- channeled to more productive ventures,’’ he said.

Durueke called on government to adopt urgent proactive measures to cushion the current hardships, and prevent the economic recession from getting any worse.

“Government appointees earning jumbo salaries and allowances like the national assembly members, governors, and their deputies should slash their salaries, to enable government get fund for life touching projects.

“There is also the need for the Central Bank of Nigeria to review some of the nation’s economic policies.

“This should be done with a view to supporting the growth of SMEs, diversification to mechanised agriculture, and industrialisation,’’ he said.

He stressed the need for the establishment of food processing ventures to encourage export of agricultural produce for Nigeria to earn more foreign reserve.

“God has a hand in the present economic hardships
because He wants us to think deep and rediscover the potentials in this nation.

“If we really adopt the right lifestyle by looking inward, Nigeria will not only survive the recession, but come out stronger as the most developed African nation,’’ he said.