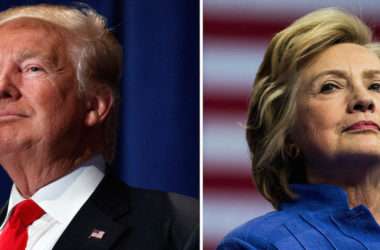 Most people are wondering why anyone would choose Donald Trump, over Hillary Clinton. This article answers this question.

The race for the United States of America presidential office began in June, 2015.

Since then, a lot of crazy things have happened, exposing the true colours of presidential candidates, Donald Trump and Hillary Clinton.

Trump has been exposed as a huge racist, who thinks very little of women, and Mexicans, while the first female candidate has faced a lot of fire in her private emails scandals.

Still, most people, especially on social media, seemed to choose Clinton over the real estate mogul, with the hashtage, #imwithher.#

However, today’s votes show that people clearly chose Trumpover the hugely celebrated female candidate, as the businessman has been become the 45th presidential-elect.

Now, a lot of people are wondering who and why anyone would pick him over her.

Well, the answer is that whites and American Christians chose him. Why? Because most people think she is the devil-reincarnate based on her opinion on abortion, and other controversial subjects.

Christian Today reports that evangelical Christians backedTrump by 81 per cent to 16 per cent, making this biggest evangelical vote ever achieved. 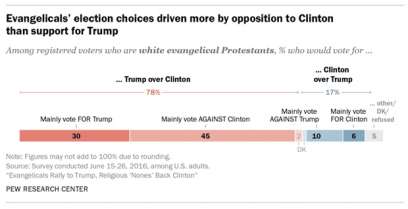 Let me explain how and why this happened.

So, Trump was very smart during his campaign because he pandered to everyone.

For Christians, he promised to fight gay marriages, and other hot button subjects, while Democrat presidential nominee,Clinton, openly showed her support for abortion, a big no-no for believers.

Her stance on certain controversial subjects for Christians turned almost all American believers against her. 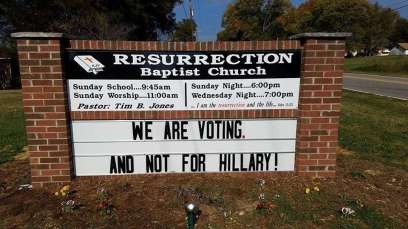 A Catholic church bulletin by Father Richard Perozich is the perfect example of how much Christians dislike her.

The weekly bulletin for the Immaculate Conception Catholic Church on October 30, 2016, stated, “It is a mortal sin to vote Democrat… immediately after death the souls of those who die in a state of mortal sin descend into hell.”

Another church in North Carolina has been vocal about their dislike for Clinton.

According to Inquisitr, the church has put up an anti-Hillary Clinton sign. 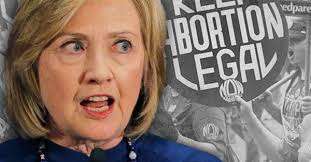 The only stipulation is you vote against abortion, corruption, excessive gun control, Obamacare and career political criminals! Otherwise, you will have to take a cab! Our church is NOT ashamed to stand up and support Donald Trump!”

Another Christian that dislikes the female presidential candidate is actress and The View co-host, Candace Cameron Bure.

During a recent episode of the show, she clearly stated that she would NOT be voting for Clinton.

Candance did not vote for Hillary Clinton

These are just a few examples of how much American Christians dislike the female candidate and why they clearly did not vote for her.

There is no doubt that there are some Christians who prefer her over him, such as Meagan Good and her husband, Devon Franklin, and so on.

Unfortunately, the like for Clinton by these very few Christians clearly could not stand a chance against the huge hate by Evangelical Christians.

American Christians did not vote for Donald Trump because they like or support him, they simply prefer him to Hillary Clinton and her ‘anti-Christian’ beliefs.