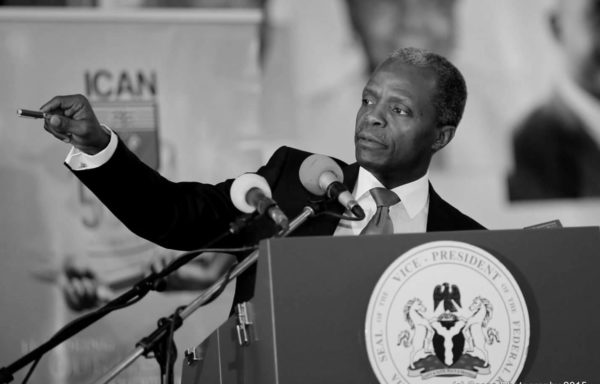 Vice President, Professor Yemi Osinbajo has expressed his support for state police in Nigeria. He however opposed the call for restructuring Nigeria into regions.

Osinbajo’s position is contained in the transcript of an interview he had on TVC some days ago which he shared on his Twitter handle.

He said that he does not support restructuring the country along ethnic lines. He added that states ought to have a good measure of control over their resources but as a nation, we must have to agree on whether we need Federal Government or not.

I strongly believe that we must have state police. Dividing Nigeria, going back to regions, and all those kind of things, I do not believe all that at all. I don’t think that we need to go back
to regions.

So, if there are people who believe that we must structure ourselves again along ethnic lines, I don’t accept that that is the right way to go.

But as a general position, Nigeria always needs to be re-engineered, we have to keep restructuring, re-engineering.

For example look at (some of the current) questions today, around whether or not a state
should have rule over its resources. That is a major point.

He added that restructuring Nigeria along ethnic lines is not the way to go for the country. “

But I don’t believe that we should go and write it in our constitution that the Presidency must go from zone to zone. I don’t think that should be a constitutional issue. I think we should leave that to the parties themselves.

If a party decides that we want zoning, it’s a party thing, let it be so. But I don’t think we should go and write that into our constitution.
And I very strongly believe that the time will come when we will no longer be emphasizing geo-political zone and that is the kind of Nigeria I will like to see.

Corruption for example, which is crippling Nigeria, is it a geo-political problem?

What I have seen, just looking at the case files, what I have seen is that when there is corruption in Nigeria, any case of corruption, you will find federal character, every geo- political zone is represented.

If somebody steals today, if you find somebody stealing $200m or $2bn as we see, you will find that everybody is represented. You will find Yoruba man, Hausa man, the man from South-South, you find the Igbo man. There is equal representation. I think we must also interrogate our elites, Nigerian elites.