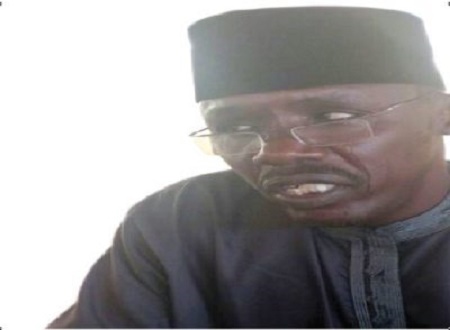 A Jos-based clergy, Pastor Kallamu Ali Dikwa, yesterday confessed how he was bribed with N1 million to keep quiet over former President Goodluck Jonathan’s alleged N7 billion ‘donation’ to the leadership of the Christian Association of Nigeria (CAN). The money was given to CAN by the Goodluck Jonathan campaign organization ahead of last year’s election.

Speaking in Kaduna, Dikwa said that he was offered N1million of the sum to ‘keep quiet’. He first blew open the allegation in 2015 when he claimed the money was given to CAN for the purpose of campaigning for the former president. Jonathan lost the election.

The Nation reports that CAN President Supo Ayokunle has dismissed the allegation as a mere fabrication. Ayokunle was vice president to Pastor Ayo Oritsejafor, who was CAN President.

Pastor Dikwa told reporters in Kaduna that he was not out to defame or embarrass anybody, but to let the world know that CAN as a body of Christ should shun illegal money.

He said:”If, as religious body, CAN cannot stand for truth, then Nigeria will continue to grope in the dark. Buhari will never succeed in his fight against corruption if religious leaders can’t shun corruption.

According to him, a particular church was ‘dashed’ a whopping N50 million.

He added, “I maintain my position on the N7b campaign money that was given to CAN and about nine Toyota Jeeps which were shared and distributed among themselves.

“On the 17th of March 2015, at the Department of State Security I was forced to write an undertaking that I will refrain from peddling such information.

“This was prior to a letter written by CAN on 20th February, 2015 to DSS on ‘Complaint against Kallamu Musa Ali Dikwa for false information, defamation of character and mischief likely to cause a breach of public peace’ which led to my arrest and torture for about nine hours by DSS.

“It was after my detention that I wrote to ICPC and EFCC complaining about what I was going through and the need for their necessary action. EFCC responded to me through a text message by one Mr. Ola Oji, Abuja office in December last year: ‘Please be informed that we have vetted your petition to the commission and found it to be civil. Consequently, we decline investigation into same. You may wish to file an action in Court against the subject please.’

“I went to court to challenge my arrest and torture. While the court case was going on, CAN leadership offered me some monetary enticement of N1m in order to withdraw the petition and the matter in court through my bank details. I did that to trap them and to prove the authentication of what is going on.

“It is on record that on 21st of September 2016, CAN through its lawyer texted me a piece through my mobile line to copy and write to ICPC as my opinion.”

Meanwhile, CAN President, in a telephone interview said, “I don’t know any Dikwa. I have never met any Dikwa in my life. I came on board three months ago and I have never given out any money to any individual. That must be a fabrication.

“He’s not in CAN. This is not the first time he will be making such allegation. He’s looking for people he would get money from. People like me will never do anything like that.

“I have never seen his face though I do read some of his allegations. He’s not somebody of integrity. I’m aware he’s a convert. He’s been sending me text messages but I can never associate with such people.”

Dikwa claimed to have been working with CAN since 2004.