Revealed: Here Is Why Clinton Lost The U.S Presidency To Trump 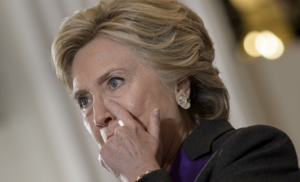 US Hispanic and African American voters were expected to help lift Hillary Clinton over the threshold and into the White House.

Data from exit polls shows that while she received large majorities of the vote cast by the two groups, Donald Trump actually did better with them than Mitt Romney did four years ago.

Former Democratic US Presidential candidate Hillary Clinton speaks to supporters at the New Yorker after her defeat last night to Donald Trump on November 9, 2016 in New York. / AFP PHOTO
This was one of the reasons Clinton failed to win enough votes in key swing states like Florida and Pennsylvania to tip the balance of electoral votes in her favour.

Here’s a look at some other data from some of the exit polls conducted Tuesday:

A surprising 29 per cent of Hispanics voted for Trump, according to exit polls cited by the New York Times and NBC News. The Times said that was eight percentage points higher than the Hispanic vote for Mitt Romney in 2012.

Trump, who pledged he would build a wall along the US-Mexico border, received more support from Hispanics than Romney, whose most controversial position was to tell undocumented immigrants to “self-deport.”

Clinton received 88 per cent of the votes cast by African Americans, compared with 8 per cent for Trump, according to the Times’ exit poll.

This was lower than the breakdown in 2012 when President Barack Obama received 93 per cent of the votes cast by blacks.

The fall-off in Clinton’s share was due to black men. She won 80 per cent of their vote, but 13 per cent went for Trump, according to an exit poll conducted by CBS News.

Well over half of white voters – 58 per cent – chose Trump, an increase of 1 percentage point over 2012, according to the New York Times exit poll.

Whites without college degrees voted for Trump by a large margin – 67 per cent, according to the Times.

That is higher than in 2012 by 14 percentage points. According to a different exit poll conducted by CBS News, the percentage of whites without college degrees who voted for Trump was even higher – 72 per cent.

Clinton won among white women with a college degree, but only by a 51-to-45 per cent margin, according to the CBS exit poll.

Surprisingly, given all of the attention to Trump’s attitudes and behaviour toward women, Clinton was able to increase the percentage of female voters who voted Democrat by only 1 point.

The percentage of women who voted for Trump was 42, according to exit polls cited by the New York Times.

Among men, 53 per cent voted for Trump, an increase of five percentage points over 2012.

Republicans turned out in a big way for Trump. Prior to the election many observers thought a significant number of them would either vote for Clinton or a third-party candidate.

The data shows 90 per cent of them supported Trump, according to the Times.

Only 7 per cent chose Clinton, which was just four percentage points higher than in 2012.

Eighty-one per cent of people in this group voted for Trump, who described himself as Presbyterian, but otherwise made few references to his religious affiliation during the campaign.

The percentage was eight points higher than the white evangelical or born-again vote in 2012, according to the New York Times’ data.