Revealed: The One Thing I Would Do Differently – Pastor Joel Osteen 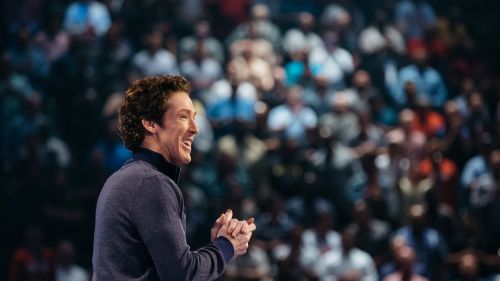 Joel Osteen, senior pastor of the 40,000-
member Lakewood Church in Houston, Texas,
says if he could do one thing differently in life,
he would trust in God more.

In a revealing message on the Joel Osteen Ministries’ blog, he reveals that he most regrets the time he has spent needlessly worrying
about situations and circumstances that were
out of his control, especially those that never
came to pass.

“I wonder how many things you’re worried
about that are never going to come to pass?”
the megachurch pastor asks in his post titled,
“If I could Do One Thing Over.”

Osteen goes on to say that if he were to do it all
over again, he would “trust God more” and
wouldn’t waste precious hours in frustration
and worry.

“I wouldn’t lose sleep worried about the
budgets, or worried if I was able to minister, or
worried if people are going to like me. None of
that worrying helped me to move one inch
forward. When I look back over my life, most of
the things I worried about never came to pass. I wasted a lot of time and energy being
uptight,” Osteen writes.

The megachurch pastor compares worry to “a
thief” that robs people of rest, joy, and
creativity.

“[Worry] will rob you of your sleep at night. It
will rob you of your joy and your creativity. It’s
hard to make good decisions when you’re
worried. If you allow it, worry can keep you
from your destiny. The Scripture says we can’t
add one inch to our life by worrying,” Osteen continues.

When we focus too much on worrying, we are
worshipping the act of worrying instead of
God, the pastor says.

“When we worry, we’re making our problem
our God. If you worry about your health night
and day, and you can’t sleep — that’s all you
talk about, all you think about — you’re
making that sickness your God,” he explains.

To combat this, Christians must take their focus
off of worry and put it back on God.

“Use that same energy to thank God that He’s
still in control. Every time you’re tempted to
worry, turn it around and thank Him that He’s
taking care of that situation. Let the worry be a
reminder to switch over into praise. Don’t let
worry rob you anymore of the blessings God has in store for your future!” Osteen
encourages.

The megachurch pastor has spoken on the
importance of fighting worry before, saying in
a recent blog post that God is better at fighting battles when believers stop worrying and
choose peace instead.

“What’s causing you to be stressed? Are you
carrying a load that you’re not supposed to
carry? Are you allowing someone to dump
their burdens on you, trying to be the savior?
Turn that over to God. Don’t let them pull you
out of rest. Are you allowing traffic, people or a grouchy boss to upset you? They may not
change, but you can change.”