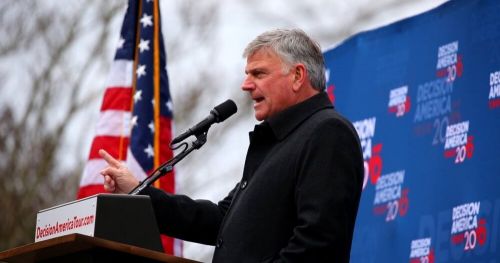 Some of the most utterly cringe-worthy moments
of the 2016 presidential election cycle have
happened when Republican front-runner
Donald Trump has tried to exhibit his
Christianity.

His latest biblical faux-pas came last week during
a radio interview with WHAM-AM in Rochester,
N.Y. While being interviewed by the host, Bob
Lonsberry, he was asked what Bible verse or
story has informed his thinking or character
throughout his life.

“Well, I think many. I mean, when we get into
the Bible, I think many, so many,” he said. “And
some people, look, an eye for an eye, you can
almost say that. That’s not a particularly nice
thing.”

“But you know, if you look at what’s happening
to our country, I mean, when you see what’s
going on with our country, how people are
taking advantage of us,” he added. “We have to
be firm and have to be very strong. And we can
learn a lot from the Bible, that I can tell you.”

One small problem: that bit of Mosaic Law was
specifically declared obsolete by Jesus himself
during his Sermon on the Mount. His death and
resurrection sealed the New Covenant that
ultimately made that bit of the old law obsolete.

“You have heard that it was said, ‘An eye
for an eye, and a tooth for a tooth. But I say to you, do not resist an evil person. But
whoever strikes you on your right cheek, turn to him the other as well.” (MEV)

Draw closer to God. Experience the presence of
the Holy Spirit every month as you read Charisma
magazine. Sign up now to get Charisma for as
low as $1 per issue.

Has God called you to be a leader? Ministry Today
magazine is the source that Christian leaders
who want to serve with passion and purpose
turn to. Subscribe now and receive a free leadership book.

Has God called you to be a leader? Ministry Today
magazine is the source that Christian leaders
who want to serve with passion and purpose
turn to. Subscribe now and receive a free leadership book.