Russia Is Ready To Restore Relations With U.S’- Putin Says As He ‘Reaches Out’ To Donald Trump 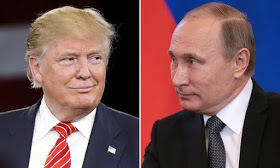 Now that Donald Trump has won the U.S. presidential election, Russian President Vladimir Putin has congratulated him saying he hopes there’ll be a fresh start in U.S.-Russia relations.

In a telegram, the Russian leader said he was confident he and Trump could start “a constructive dialogue based on the principles of equality, mutual respect, and genuine consideration for each other’s positions.”

He also hoped that Trump would help resolve “the current crisis” in U.S.-Russian relations.

Trump during his election campaign has been a vocal admirer of Putin, saying the world will be a better place if Russia and America got along, even saying he could visit the Russian leader during his first 100 days in office.

“(Trump) spoke about resuming and restoring relations with Russia. We understand the way to that will be difficult, taking into account the current state of degradation of relations between the US and Russia,” Putin told Russian state television.

“As I have repeatedly said, that is not our fault that Russia-US relations are in that state. Russia is ready and wants to restore the fully fledged relations with the US. I repeat we understand this will be difficult, but we are ready to play our part in it.”

According to multiple reports, Russia watched the U.S elections closely, they even had a 24 hour election watch on State TV and even had actors play out the roles of Trump and Clinton on election day.