SA Prophet Claims He Visited Heaven, and for $340, You Can Get To View The ‘Heavenly’ Photos He Took 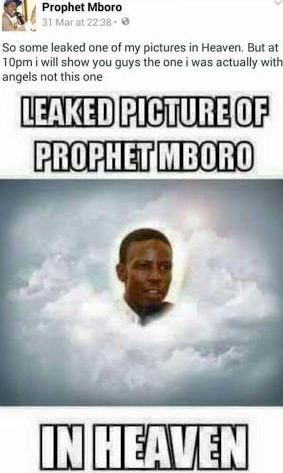 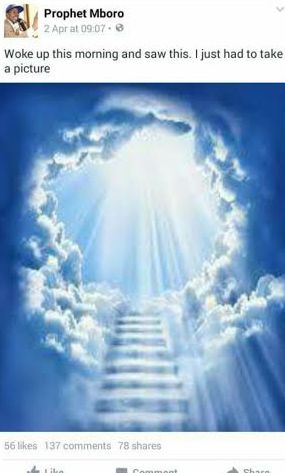 South African preacher, Paseka Motsoeneng, aka
Prophet Mboro, leader of the Church of Incredible
Happenings claimed that he ascended to heaven
and took photos to show as proof!

The incident happened at the Easter Service in
Johannesburg, but people from as far as Pretoria
testified that the sky somehow looked different
around 10: 30 am that Sunday.

“The selfies i took last night in heaven though. You
will be surprised”  he posted on Facebook on April
1st…and you would you think it was April’s Fool joke but he was actually very serious!
According to local reports, members of the church witnessed the great deed, and were awed to watch the controversial prophet ascend into heaven. Before then, he’s been fasting for 4 weeks
and reportedly told some of his church members about the incident which he claimed was revealed to him while he was fasting.

Prophet Mboro was about to commence his sermon during an Easter service in Johannesburg when an unusual light flooded the gathering and transported him to God’s kingdom.

In a statement released to the media, a senior member from Mboro’s church said that Mboro is being rewarded for being an honest servant of God.

However, those who wish to see photographic evidence of the afterlife will have to pay as Prophet
Mboro is allegedly asking for a donation of 5,000 rand (about $340), BBC reports.

On March 31, he wrote on Facebook, “Tonight at 10pm i ll post one picture i took when i went to heaven. People have despised me alot. The one who wants to get it first inbox me and pledge atleast R2000

That same day, he posted a photo with a caption “Leaked pictures of prophet Mboro in Heaven” claiming that someone leaked one of my pictures in Heaven.

“So some leaked one of my pictures in Heaven. But at 10pm I will show you guys the one I was actually with angels not this one”

On April 2, the prophet posted another photo and said he took it.

“Woke up this morning and saw this. I just had to take a picture” he captioned the photo.

BBC NEWS reports that South Africans are ridiculing the prophet.

“If the Americans can go to the Moon why can’t
Pastor Mboro go to Heaven and take pics,”one
tweeted. Another commented: “Don’t forget your
selfie stick when U go to heaven.”

For those unable to afford the donation, see some
of the speculation online about what the photos
might show. 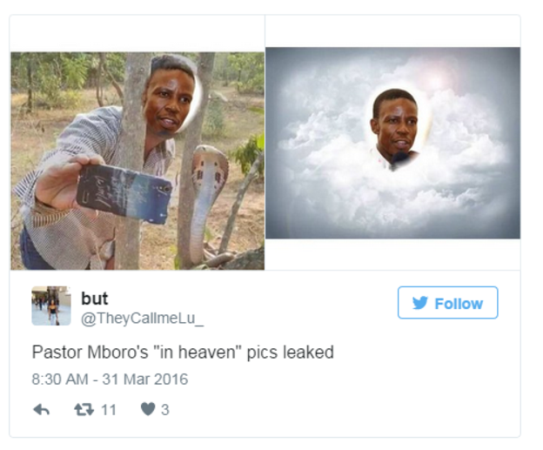 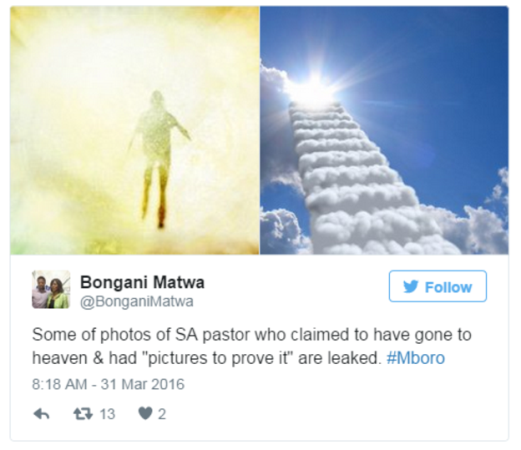 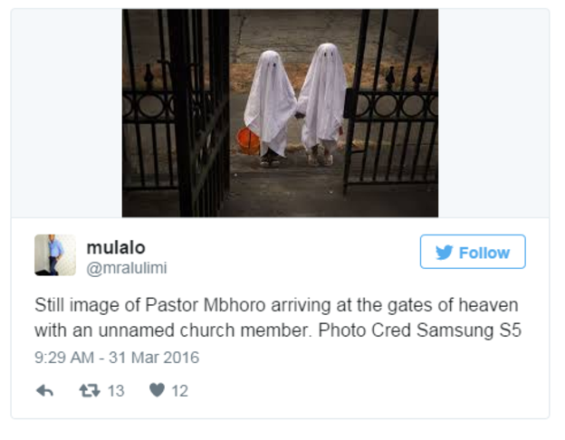 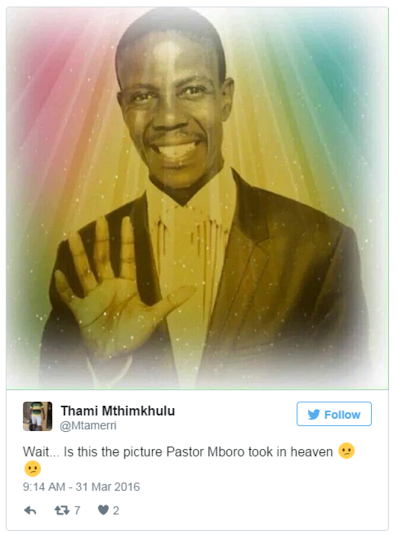