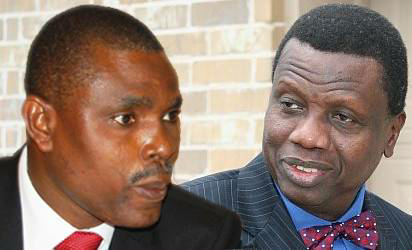 Jim Obazee, the sacked executive secretary of the Financial Reporting Council of Nigeria (FRC), “vowed to remove Enoch Adeboye as general overseer of the Redeemed Christian Church of God (RCCG)”.

According to Segun Adegbiji, the church’s head of media and public relations, Obazee, who willingly resigned as a pastor in RCCG and was “neither suspended nor sacked”, is on a vendetta mission against the general overseer.

“Obazee was a teacher at the School of Disciples, but he voluntarily resigned. Afterwards, he started attending RCCG Province II Parish on Acme Road, Ogba, Lagos. He was neither suspended nor sacked by the church,” Adegbiji said on Thursday during a media parley with journalists at Redemption Camp, Mowe, Ogun state.

“There was no feud between him and the church that I know of, although I can confirm that I heard the story that he vowed to get Pastor Adeboye out.”

Adeboye recently appointed a new national overseer for the church as a result of the corporate governance code stipulating a term of 20 years for heads of not-for-profit organisations, although he remained the worldwide overseer of the church.

Adegbiji further noted that despite the suspension of the FRC law, Adeboye would not reverse his decision to step down.

“If you know Daddy GO (Adeboye) very well, he does not make such an important decision without consulting the Church Council, and most importantly, God. That decision has been made and it does not in any way affect his position as the General Overseer of the RCCG.

“So, there is no need to reverse the decision after the Federal Government has suspended the implementation of the FRC law.

“The RCCG is a fast-growing church and as of the last count, we are in 192 nations of the world and most of these countries have their national or country overseer. So, there is nothing wrong if Nigeria, which also has the blessing of hosting the world headquarters of the RCCG, has its own national overseer.

“However, this does not, in any way, affect the position of the General Overseer as all other national overseers of the church in other countries report to him.

“He has been and he will continue to perform his role without let or hindrance. So, he (Adeboye) has never stepped down as the General Overseer of the RCCG.”

Joshua Obayemi, the new national overseer, was a deputy in charge of finance and a member of governing council in RCCG before his appointment.