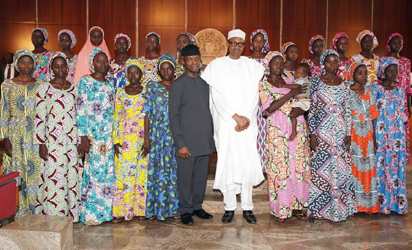 Their message came loud and clear. They don’t only need your prayers, pity and empathy, they also need your help to get good education. That was the summary of Rebecca Manu’s speech last Wednesday at the press gallery of the Council  Chambers of the Presidential Villa, Abuja.

Manu is one of the released 21 Chibok girls abducted over two years ago, precisely on April 14, 2014 by Boko Haram insurgents in Borno State.

She spoke  on behalf of the freed girls.

She showed enthusiasm and passion for knowledge. She must have felt elated to speak before a large audience comprising President Muhammdu Buhari, his vice, Professor Yemi Osinbajo, and cabinet ministers.

Manu entertained the crowd and at the same time provoked some skepticism on their educational background. She made several slips while reading her script. Easily noticeable was the repetition of the word “OK!”.

Again, Manu, several times said “and then after that”, a phrase that apparently indicated that she was so coached or guided. Very well then.

Did she memorize the speech or were all those phrases written on the paper she had? Only Manu could answer the question.

But those details didn’t matter. And it also didn’t matter if the girls were preparing for the Senior Secondary School Certificate Examination, SSCE, organized by West African Examination Council, WAEC, before they were abducted. Whether they could speak good English as would-be secondary school leavers was also inconsequential; after all, two years and  six months in captivity would have dealt with their psyche and mental competences. What mattered was that by inference, Manu made her point very clear: they needed to be roundly educated.

To them, returning home alive and healthy was a miracle. According to Manu, they had given up on their return  to their parents. But God’s grace, the relentless efforts and  commitment of  Buhari on security matters paid off.

Starting off with two Christian songs which she led  for the girls, she also called for prayers for their colleagues still in captivity.

“We are happy for seeing this wonderful day because we didn’t know we could  come back to be members of Nigeria. Let us thank God for His love. Let us pray for the rest of the girls  still in  Sambisa. Let God help”, she said.

How they were catered for

Anyone who saw the girls on the first day of their release, penultimate Wednesday, would commend the Federal Government for the attention they were given. Their looks gave them away as people who had just  returned from the land of the “dead”. They looked haggard and emaciated but within  one week, the girls’ body symmetry stood out.

Said  the minister of women affairs, Mrs. Aisha Al-Hassan, who spoke at the occasion:

“This indeed a moment that we have been eagerly waiting for. The date 13 October; 2016, will remain a significant one in the annals of history.

“All the 21 girls came back looking haggard, weak and emancipated. Doctors were immediately dispatched to examine them and provide prompt medical assistance. Also, personal personal supplies like clothings, toiletries and others were provided fir them. The girls parents were also brought in from Chibok, Borno  State. Uncontrolled emotions when the parents met with them.

To underscore the importance of the girls’ education, representative of the girls’ parents and Chairman of Chibok local government area, Mr. Ya’aga Yarakuwu, expressed gratitude to God, the President and the Nigerian security apparatus for ensuring the safe return of the girls.

While highlighting the challenges bedeviling the community which he said included lack of roads and schools, Yarakuwa  appealed to Buhari  to come to the aid of the community, urging for deployment of more security personnel to the area.

He appealed to the President to take the girls abroad to further their education even as he stated that most of the girls’ parents were dead as a result of high blood pressure.

The day also reminded  Osinbajo, an academician, who said  that “once a teacher, always a teacher”, as he performed the task of formally presenting the girls to the President.

He recalled that the whole country was emotional as they received the girls upon their return.

In a voice laden with emotions, Buhari, while receiving the girls, stated that the girls had seen the worst of things the world had to offer.

Imagining the horrible experience the girls must have had in the hands of the insurgents for over two years, he, however, said that the worst days were over, promising a new dawn for the girls

“These 21 girls will be given adequate and comprehensive medical, nutritional and psychological care and support. The Federal Government will rehabilitate them, and ensure that their reintegration back to the  society is done as quickly as possible,”the President said.

“Aside from rescuing them, we are assuming the responsibility for their personal, educational and professional goals and ambitions in life. Obviously, it is not late for the girls to go back to school and continue the pursuit of their studies.

“These dear daughters of ours have seen the worst that the world has to offer. It is now time for them to experience the best that the world can do for them.   The Government and all Nigerians must encourage them to achieve their desired ambitions”.

Buhari also revealed that the girls’ release was a product of negotiations between government, Boko Haram and some international agencies.

“The release of these 21 girls followed a series of negotiations between Government and the Boko Haram group, brokered by our friends both local and International. Since this Administration assumed office, we have been working towards the safe release of the girls.

“The DSS, military and other security agencies have spared no effort to secure our girls. These 21 girls are the manifestation of our doggedness and commitments to the release and return of the Chibok girls.”

‘The rest of girls would be rescued’

The President also pledged a renewed effort that would see the return of the remaining girls while thanking their parents for their patience and understanding.

“While joining their parents to rejoice and praise the Almighty, we shall redouble efforts to ensure that we fulfill our pledge of bringing the remaining girls back home. Already, the credible first step has been taken and Government will sustain the effort until all the remaining girls return safely”, Buhari  said.

“The Federal Government appreciates the patience and understanding of the parents of all the abducted  Chibok girls. We equally thank Nigerians and the International Community for their support and prayers, and for never losing confidence in our ability to secure the safe release of our girls.

“Once again, I congratulate the 21 released girls, their parents, the Chibok community, our security agencies and all Nigerians on this day of delight and rejoicing.”

As Manu  spoke, my eyes spotted  Alhaji Adamu Adamu, the minister of education who seated on the high table with Buhari. He never smiled. His mind must have been running riot as he wondered if the girls would have passed their physics and chemistry subjects and in flying colors. But then, the development has thrown up a big challenge to the government that there is need to education the Nigerian  child, not just the girl alone for brighter future of the country. Thank goodness that the President  who has children who are graduates, was also there to see and hear for himself.