So Sad: 53 Lives Lost In Multiple Accident Along Benin-Asaba Expressway As CBN Denies Involvement Of its Bullion Vans 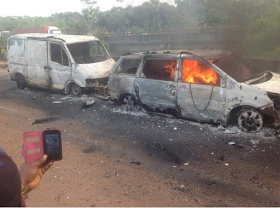 The Central Bank of Nigeria (CBN) has denied allegation that one of its bullion vans was involved in an accident that killed several persons on the Benin-Asaba Expressway.

The apex bank denied the allegation in a statement by its acting Director, Corporate Communications, Isaac Okorafor, in Abuja

There had been reports earlier that several persons were feared dead in an accident involving a CBN bullion van, a fuel tanker, a commercial bus and cars on the Benin-Asaba-Onitsha Expressway.

The victims were said to include officials of the bank, policemen and passengers of commercial buses

“I wish to state that the report is entirely untrue. The vehicle that was used to illustrate the news story does not belong to the CBN.

No CBN bullion van was involved in any accident. The only accident on the road involved vehicles which do not belong to CBN. The reporter may have mistaken a CBN bullion van which had malfunctioned during a currency movement from Asaba to Benin and was immediately substituted and securely parked at the Abudu Police Station.

The van was part of a totally unrelated road traffic accident that happened earlier on that same road,” CBN’s statement said.

The FRSC in Edo state also released a statement on the incident on Friday, saying that 53 persons died, and 5 others sustained serious injuries.

The statement added that the incident involved a petrol-laden tanker, three buses, an SUV, a truck, and a motorcycle. 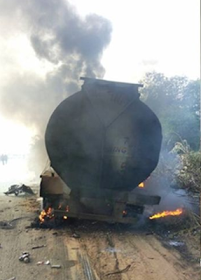 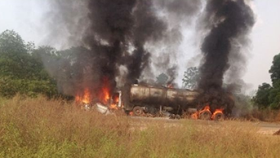 RIP to the deceased.