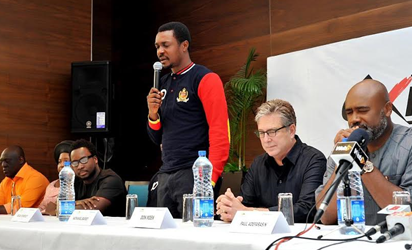 After months of preparation, the cosmopolitan city of Lagos will be agog again as thousands of worshippers and gospel music enthusiasts will converge for the biggest gospel musical concert in Africa Firday at the Tafawa Balewa Square, Onikan, for the 11th edition of- The Experience’ Lagos 2016.

Unarguably, for past 10 years, the Interdenominational Gospel concert has received nods and is regarded as the biggest in Africa and it has been recorded as one of the biggest in the world. At the worship concert, gender, nationality, status and race cease to exist as people lift up their voices in praise the Almighty God.

Experience
Over the years, the concert has been home to thousands of worshippers every December as it always heralds the festive vibes of Christmas.

It also records over 750,000 worshippers which gathered yearly with gospel ministers across the world, as they see this as one- of- a- kind concert as a glowing platform for them to express worship.
Last year, The Experience celebrated in awesome style a decade landmark of its existence. This year’s edition which is themed: “The Experience 11 is Revealing Jesus”. While an underway plan for this edition shows that, there is no stopping move.

Shedding more light on this year’s theme, the senior Pastor of House on the Rock, Pastor Paul Adefarasin stated that: “the purpose of the 2016 edition is to further reach the world with the message of the Gospel of Christ, in a fashion so simple, yet effective. Is high time Christians stop sitting in their corners and but taking centre stage to spread the Gospel of Jesus by truly Revealing Jesus.”

However, this year’s Experience will be ever promising as it features soul stirring mix of ministers that will give worshippers an incredible reason to praise God. The line-up of both international and indigenous gospel artistes is already fueling anticipation to perform tomorrow night.

Meanwhile, the popular Experience Portal has been made bigger and more interactive to ensure that users from all parts of the world get The Experience every day even before the tomorrow’s event. The online portals also provide insightful articles, music reviews, event information and highly engaging activities with provision for users to register in order to benefit fully from the rich resources shared.