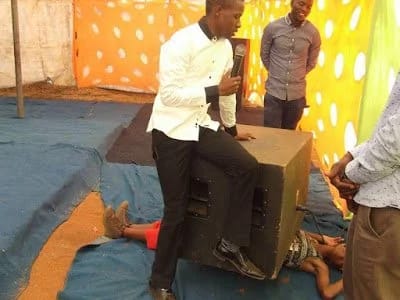 A young lady has met her death after a failed
miracle attempt by her South African pastor.

Reports circulating on social media claim that the
South African pastor in a bid to perform miracle and
show how powerful he is, caused the death of the
young lady after putting a heavy speaker on her.
The girl died due to internal injuries she sustained. 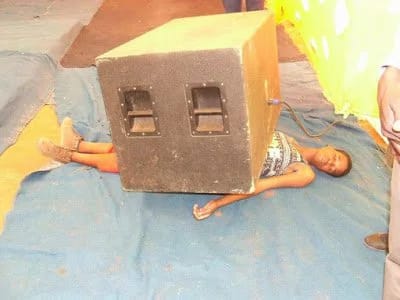 The pastor during the ‘miracle’

Read the report below:

Congregates of Mount Zion General Assembly
went home with heads down on Sunday after a
failed demonstration of power by the church pastor
when a girl fainted after he put a very big and
heavy speaker on top of her, promising her that
she would not feel pain. The woman has now died from internal injuries caused to her lungs.

”Pastor Lethebo Rabalango had organised a night
of worship at his church in Polokwane where he
was teaching about demonstration of power in
which he emphasised that if Jesus walked on
water, he too could do anything with faith.

”It is on this point that he invited a girl from the
praise team and asked her to lie down. He then
ordered ushers to carry a big speaker and put on
her stomach saying the weight would not harm
her. As if it was not enough, he climbed on top of
the speaker, adding pressure to suffocate the girl who remained quite for she had already passed
out.

”After seating on top of the speaker which was still
on the girl’s stomach for close 5 minutes, he got up
and ordered removal of the speaker, but the girl
could not rise because she had fainted. It took
some elders giving her first aid treatment that she
came back but complained of a broken rib. The she was then taken to hospital. However, the pastor
blamed the girl and accused her of having little faith
for she could not withstand a very simple task.
Pastor Lethabo can be accessed via his Facebook
Account.”