Souther Kaduna: You Are Hypocrites- CAN Tells Imams Calling For Their Arrest 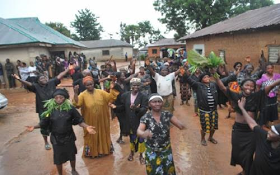 Few dayas ago,  the Council of Imams and Ulama in Kaduna state, held a press conference where they called for the arrest of some Christian religious leaders including CAN President, over some of the comments he has made on the lingering Southern Kaduna crisis(Read here).

CAN in a statement released yesterday, described the Islamic clerics as hypocrites for turning blind eyes to the real issues that have continuously caused the crisis. The statement signed by the Secretary General of CAN,  Rev. Musa Asake reads in part;

“To CAN, this is a surprising shameless, unveiled criminal support for evil. While, the killings of children, women, aged and the most defenseless of Southern Kaduna natives and the destruction of entire communities was at its peak, no one knew that a group called Council of Imams and Ulama existed in Kaduna state.

When Church leaders under the banner of CAN kept praying for Southern Kaduna and other affected areas in the country, visiting traumatized communities and softly calling on government to do the needy, this Council of Imams was silent and invisible. In a press conference in Kaduna on November 7th 2016, Jema’a Foundation, Miyetti Allah and Mobgal Fulbe Development Association confirmed that Fulani and Hausa Muslims have been behind the ethnic cleansing and destruction of villages and houses of worship in Southern Kaduna. They claimed they had to do this to entrench their rights to practice Islam, alleging they were being marginalized in Southern Kaduna. Those who addressed the press were Abdullahi Hassan Mohammed, Ahmad M. Yandeh and Abdulhamid Musa. Again, on December 31, 2016, Dr. Ibrahim Abdullahi, the Assistant National Secretary of Miyetti Allah also echoed the same position that the Fulani were carrying out reprisal killings. In view of this glaring confession by all these Fulani men, is it not reprehensible, distasteful and vile that the Council of Imams and Ulama Kaduna State did not call for the arrest of these people who are in conspiracy with the murderers? With their position now, it is obvious that these Imams are part of the evil network desperately trying to decimate the Christian population of Southern Kaduna and the taking over of their lands by Islamist herdsmen terrorists. These are the Muslim clerics that encourage and inspire the jihad carried out by their foot soldiers. We have refused to keep silent as we are speaking up to government and telling the world the devilish plot against the Christian community in Southern Kaduna and other affected areas. While those they inspired through their wicked sermons to kill and conquer new territories for Islam are carrying out their instructions, they are now intimidating the victims with Gov. El-Rufai’s infamous position of “call for self-defense is hate speech. Our Lord Jesus Christ is exposing the enemies of His Kingdom one by one. For the records, the words and the way of life of our Lord Jesus Christ, the Saviour of the world before whom all knees shall bow, was never violent. CAN therefore, thrives under His inspiration and guidance. We can never call on a Christian to kill another human being. But we cannot tell a Christian to unjustly submit himself to murderers, his family wiped, his community taken over with crude violence so that a new community of herdsmen terrorists be established as it is happening now in Southern Kaduna, especially as government is not showing enough commitment to arresting the situation. CAN therefore, has no apology over what comment it has made on the religious cleansing in Southern Kaduna and other places in the country. It is clear fact that CAN has the more to lose with the continuance of these madness. Since May last year to date in Southern Kaduna alone, over 100 Christians have been killed; over 53 communities with their churches have been destroyed and not less than 16 villages have been conquered and are now being occupied by Fulani herdsmen terrorists”.