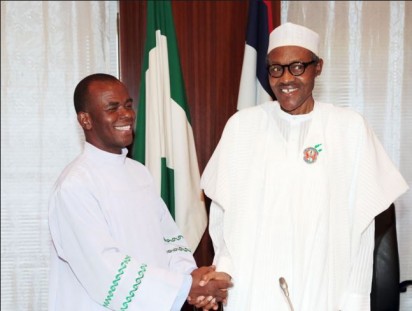 Fiery Enugu Catholic priest, Rev. Fr. Ejike Mbaka, has
predicted bleak future for the country, saying that
many Nigerians would die in the present economic
meltdown.

Mbaka-Buhari, He, however, said that President Muhammadu
Buhari was not responsible for the hunger in the
country, blaming his predecessor, Dr. Goodluck
Jonathan, for the situation.

Mbaka, who was reacting to media reports about
his scathing remarks on the high level of hunger in
the country as well as the implications for Buhari’s
second term election, said Jonathan’s
administration was responsible for the myriads of
problems facing the country.

In a statement entitled, “Fr. Mbaka’s assertion
`There is hunger in Nigeria’: Not an attack on
President Buhari”, Mbaka, yesterday, denied ever
bashing Buhari for the country’s economic
problems or the level of suffering in the country.

The cleric had been quoted in a sermon on
Wednesday as saying Nigerians were hungry as a
result of Buhari’s economic policies, saying the
President would lose the 2019 polls if the situation
persisted. The statement came against the
backdrop of Mbaka’s position ahead of the 2015 polls in favour of Buhari.

The statement, yesterday, signed by Mbaka’s
spokesman, Maximus Ike Ugwuoke, said he
observed with keen concern the news trending in
some sections of the media that he “attacked”
Buhari.

“The news headline is not only sensational but also
a censorious media colouration and hype of the
message of the cleric titled, “Bless and Be Blessed”
for whatever ends”, the statement said.

The statement explained that although Mbaka
lamented the high level of hunger and suffering in
the country, it was followed by another message
where he said Buhari was not responsible for the
situation but the previous administration.

It pointed out that the controversial message was
followed by another one entitled, “Mega Change of
Conditions” , saying the second message absolved
Buhari of blames about the economy and hunger in
the country.

“There is sword that is moving about in the
country. People are dying like flies. The sword of
Hunger is eating the land. And as I have told you,
this is just the beginning. If anybody is telling you it
is going to be well very soon that person is
deceiving you. This is because many of us were among those that were alive during the years of the
past government. The past PDP government was
like the grasshoppers and locusts (regimes to
Nigerian). The past government was a disaster to
the land of Nigeria; the past government was
cancer to this country. There is no need trying to cover their incalculable and iniquitous mess. If you
don’t feel it now, you will feel it later”, the statement
said.

Hunger is everywhere; the hunger was created
before this new government came in. Buhari is not
the maker of the hunger.

“The hunger was created during the Jonathan’s
PDP administration but Buhari should abate the
long procrastination, bureaucracy and slow
methods in tackling it.

“That is why I have been saying and I keep on
saying that the past administration should publicly
come to apologize to Nigerians. “He, therefore
maintained that contrary to media reports, Fr.
Mbaka merely reiterated the obvious sufferings that
Nigerian are facing (which even the president himself had at points acknowledged and sued for
patience and perseverance) and advised the
president on the ways to tackle it, that is, by
engaging economic gurus and listening to good
advisers.

“In the background of the message, Fr. Mbaka
encouraged the gallant warrior, President Buhari,
to continue his battle against corruption and
insurgency asserting that if not a man like President
Buhari, by now people may have stopped going to
church and mosques. Boko Haram might have wrecked this country. People might have equally
stopped going to schools, markets etc. kudos to
Buhari.

Meanwhile, a cleric has sent Senate President
Abubakar Bukola Saraki to President Muhammadu
Buhari, saying the President should be told that
there is hunger and suffering in the country. The
Vicar and Archdeacon of Ikoyi Diocese, Anglican
Church, said Buhari should move fast to address the concerns of the people.

In his sermon at the funeral service for the late Dr.
Ebenezer Aboyowa Ikomi, held at Our Saviour’s
Church, Tafawa Balewa Square, Lagos, yesterday,
Oyetunde said the economic situation is making
Nigerians feel their lives have only changed for the
worse and that government is not doing enough to address the situation. According to him, there is
mass unemployment, inflation and hunger in the
country up to the point that “Nigerians now really
feed from the dustbin”.

He warned that it might get to a point that political
leaders in the country will not be able to walk freely
on the streets.

The bad economy, which is not receiving good
attention, he stated, has created other social and
political problems which are making the entire
country unsafe for residents and visitors.

Oyetunde noted the presence of the number three
citizen in the congregation, saying there was
certainty that the message would get to the
President and could propel some positive actions
that will change the course of things for better for
the people.

The cleric believed the Senate, led by Saraki, and the
entire National Assembly ought to work with
Buhari and also involve other Nigerians in the bid
to solve the socio-economic problems plaguing the
country.

On the anti-corruption fight, he commended the
Buhari government but advised it to adopt the plea
bargain option in which government can at least
ensure that it gets 70 percent of the money stolen
and use it for the funding infrastructural
development and social services.

Journalists at the occasion could not get Saraki to
respond to the issues raised by the cleric. But one
of the aides in his entourage said the Senate
President was worried by the statements of the
Archdeacon, “who was obviously speaking the
minds of the ordinary citizens”. The aide, however, said it was unfortunate that while Oyetunde spoke
to the Senate President as the number three citizen
with the responsibility to find solutions to the
problems, the reality on ground is that the
executive and legislature were not working
together as they should.