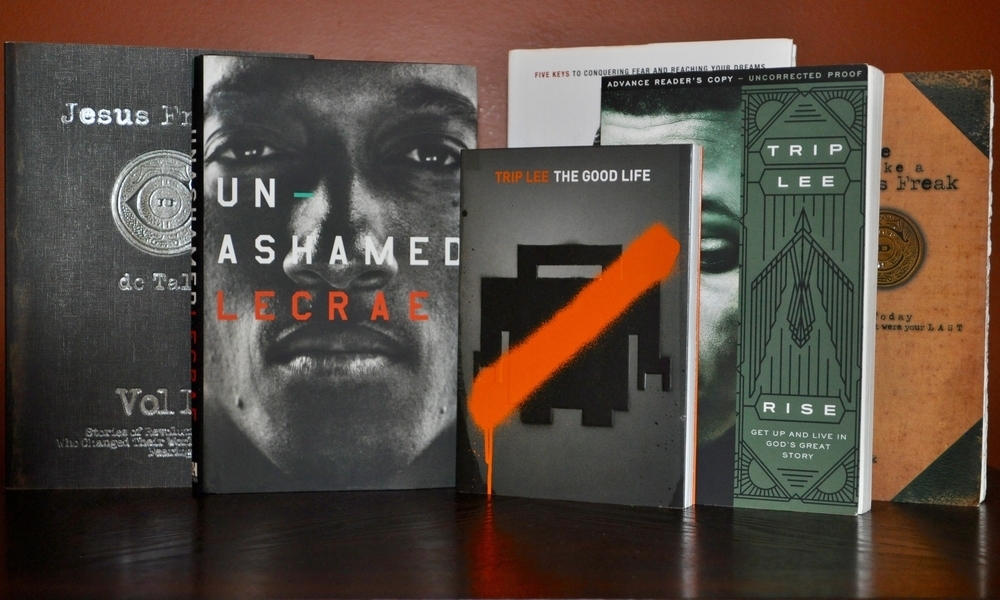 Over the years Christian hip-hop has been vocal
about everything from faith, temptation, race, and
even the highs and lows of being an artist.
Sometimes the emcees have to take their message
out of our headphones, and visualize them onto
the pages of a book. The following is a list of 10 artists in the Christian hip-hop community who
have written books (in no particular order).

Lecrae
Lecrae became a first time author this year with the
release of his book “Unashamed.” The book chronicles his journey of an erratic childhood into a
troubled adolescence. Through it all, he was able to
find God and his calling for his life.

Trip Lee
In addition to rap, Trip Lee is also an author and a
pastor. He has penned two books, “The Good Life”
and “Rise: Get Up and Live in God’s Great Story.”
There is also a third book coming at the end of this
month, “Incredibly Normal: The Shocking Truth About Who You Really Are .”

.”
“The Good Life” is about how “good” living life as a
Christian is and “Rise” is about living to your
maximum potential in Jesus. His newest book
continues in that same vein and further pushes
Christians to realize how special they are in God.

Propaganda
Propaganda is an emcee and a spoken word artist,
so it makes sense that his book, “I Am Becoming” is a selection of poetry.
The book was put out by Humble Beast and
showcases the artist’s way with words on paper for
the first time.

Thi’sl
Thi’sl put out his first book this year, an
autobiography called “Against All Odds.” The name references his victorious bouts with poverty, gangs,
drug dealing, and a false murder charge that
awoke him to God.

Soup the Chemist
Christian hip-hop pioneer, Soup the Chemist, took
his experiences from the late 80s and early 90s,
and documented them in a book. He released,
“Through My Windows” a couple of years back,
and the book shows snippets of what it was like
touring and performing as a Christian rapper before it was as well known or accepted as it is
now.

Phanatik
Not only is Phanatik one of the legendary emcees in
The Cross Movement, but he is also a prolific author.
Over the years the emcee has written five books,
“City of Allegory, Book 1: The Immanuel City Saga,”
“City of Allegory, Book 2: The Handy Man’s Fix,”
“The Death of Hip-Hop, Marriage & Morals: Helping Youth Resurrect Culture, Family and Faith,” “From
Hip-hop to Hollywood: The Art of Christianity: A
New Millennium Perspective on Christianity and the
Arts,” and his latest work, “Navigating the ’N’ Word: How Keeping “N****s” Alive is Killing Black Folk.”

Urban D.
This next artist wears many hats, and writes many
books. Urban D. is a pastor, speaker, author, and
rapper who has published three books, “Next
Steps on Your Spiritual Journey,” “Un.Orthodox,”
and “ReBuild.”

His books generally speak on the church, culture, and a person’s faith walk. They serve as tools to
help people live as Christians.

Flame
“All In” is the first book written by hip-hop artist Flame. The book is geared toward young adults
and deals with going “all in” on a commitment to
God.

Manafest
More rock star than rapper, Manafest has had ties in the Christian hip-hop community since the early
2000s. Over the years Manafest’s style has evolved
away from rap, but his passion for creating and
helping others has remained constant.
A few years ago he released his first book, “Fighter:
Five Keys to Conquering Your Fear and Reaching Your Dreams.” The book is about his come up and
struggle to become an artist, and it provides tips for
aspiring musicians to “make it.” It also helped
launch his current “Smart Music Business” series.

DC Talk
Although DC Talk has been associated with
Christian hip-hop for around 20 years, they still
play an important part in the culture.
The trio put out five books under the DC Talk name,
and each one highlighted people who were killed
for their faith in Jesus.
“Jesus Freaks,” “Live Like a Jesus Freak,” Jesus
Freaks Volume II: Stories of Revolutionaries Who
Changed Their World Fearing God, Not Man,” Jesus
Freaks: Revolutionaries,” and “Jesus Freaks:
Martyrs” have inspired generations of people to ask
themselves if they would die for Christ. Which one of these books have you read? Are
there any that you’re going to add to your reading
list? Let us know in the comments.