STORY: Andy Mineo And Uncomfortable Redefinition Of An ‘Unashamed’ Artiste 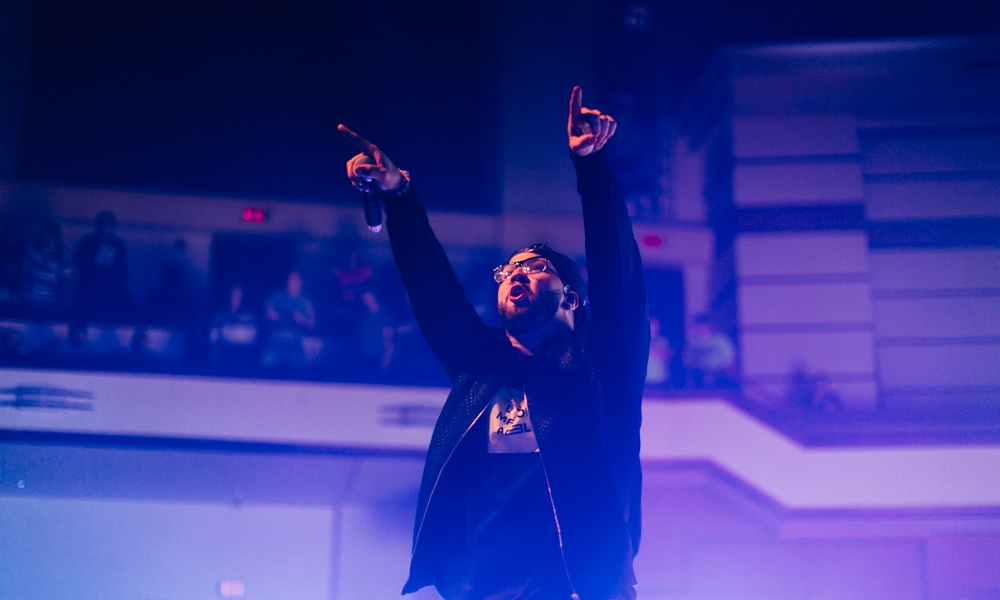 “What we want this album to accomplish is to put
you at the roundtable,” Illmind told Mineo in the studio as they finished Uncomfortable. “We need to
get you at the conversation table. You have the
fans. You obviously have the talent. You got the
songs. You got your style. You’re super unique.
Let’s put you [at] the table.”

Some Christian hip-hop fans would instead prefer
the Andy Mineo who made Formerly Known at the table.

Formerly Known, his debut project on Reach
Records in 2011, namedropped celebrated
Christian teachers Charles Spurgeon and Oswald
Chambers, used vocabulary like “predestined” and
boasted a higher Jesus-per-minute rate than
Uncomfortable. Some listeners who have heard Mineo transition to less overtly Christian music
believe he’s less “unashamed,” a reference to the
Bible verse Romans 1:16, which Reach has
trumpeted as a motto since 2005.

Formerly Known, his debut project on Reach
Records in 2011, namedropped celebrated
Christian teachers Charles Spurgeon and Oswald
Chambers, used vocabulary like “predestined” and
boasted a higher Jesus-per-minute rate than
Uncomfortable. Some listeners who have heard Mineo transition to less overtly Christian music
believe he’s less “unashamed,” a reference to the
Bible verse Romans 1:16, which Reach has
trumpeted as a motto since 2005.

“If you can’t see Jesus in my lyrics, the problem is
not me. The problem is you,” Mineo said. “It’s not
an indictment against me. It’s an indictment against
you. You must not know him that well … To not
hear the heartbeat of Christian ideals pumping
through the music means you don’t know Christianity that well. You know a happy, clappy, T-
shirt, Christian bookstore Christianity — that must
be what you know, or you are a very bad observer
of art.

Uncomfortable dropped on September 18 and
became one of the most sold and publicized
projects of 2015 by an artist affiliated with Christian
hip hop. Mainstream news outlets Fox 5 New York,
Yahoo! Music, MTV, Billboard, HOT 97, Sirius XM,
Sway in the Morning, HipHopDX, XXL and VIBE covered Uncomfortable, which sold 35,329 units in
its first week and debuted at No. 10 on the Billboard 200.

As Mineo and Reach are on the brink of becoming
more influential in mainstream hip hop than
Christians ever have, Christians have criticized them
for how they have went about it — with less overtly
Christian music, imperfect interviews and the removal of Romans 1:16 from their about page.

How they have went about it, though, is not only
more complex than an about page, but also hasn’t
been completely visible to the public. A broader
view may lead genuinely-concerned critics to
reconsider their definition of an “unashamed”
artist.

Two hours before Andy Mineo’s Uncomfortable
Tour performance on October 16 at Benson Great
Hall in St. Paul, Minnesota, he fielded questions from
VIPs about a variety of topics from music to
marriage. However, one VIP was not looking for an
answer when he raised his hand for the microphone.

“What’s your name, and what’s your question?”
Mineo’s photographer, Mike Folabi, asked after he
rolled over to the VIP on his hoverboard.

“My name’s Leo. It’s more of just a statement,” 27-
year-old Leobardo Sandoval said. “I’m a recovering
addict from drugs and alcohol, and I got help at
Minnesota Teen Challenge. I just wanted to say that
having your music and some of the struggles … it’s
just so relatable, man. It’s gotten me through some tough times, so I just wanted to say thank you
because … it’s legit.”

On April 19, 2012, Sandoval and an associate
attempted to sell cocaine to an undercover cop.
They were arrested and charged with three felony
counts of cocaine possession, according to the Faribault Daily News. Sandoval faced as many as 175 months in prison.

In July at the pretrial hearing, the judge furloughed
him from jail to participate in a 13-month residential
drug-and-alcohol treatment program through
Minnesota Adult & Teen Challenge (MnTC). Sandoval
attended church for the first time there. During the
five months in MnTC which preceded his December hearing, his program manager, Vashaun Johnson,
said he watched Sandoval undergo
“metamorphosis.”

While a court evaluator recommended that
Sandoval be sentenced to at least 104 months in
prison, the evaluator wrote the following in his
report: “He hopes the court will allow him to
continue in that program, however, he stated that
he believes the direction his life will take is in ‘God’s’ hands.”

“I was ready to follow the Lord even if I had to go
to prison,” Sandoval said.

Sandoval miraculously didn’t have to go to prison.
Although he pleaded guilty, the judge ordered a
downward departure, which granted Sandoval’s
wish to complete the 13-month program.

After the Uncomfortable Tour Q&A, Sandoval told
Rapzilla that he had been clean for four years,
would be married in November and, on the car ride
to the concert, felt the urge to let Mineo know how
much his music has influenced him.

“One of the things that has been key in my recovery
is filling my spirit and my thoughts with something
positive,” Sandoval said. “I used to listen to a lot of
hip hop — 50 Cent, Eminem and a lot of those other
artists, and they didn’t have the best influence on
me and my attitude.”

Sandoval didn’t blame hip hop for his drug use, but
said the music normalized and glorified what
landed him behind bars. He needed a new
soundtrack to his life, but wanted one that
compared artistically to the mainstream hip hop
that he partied to. Through a friend at MnTC, he discovered just that

Today, Sandoval uses Christian hip hop to minister
to his friends who are unbelievers. However, he
personally wasn’t “saved” through music. He heard
the gospel in church, and rather needed music he
could relate to, as a young Christian who once lived
to party.

“Jamming to guys like Mineo, Lecrae and Trip Lee,”
Sandoval said, “it just gives me something positive
that I can turn up to.”

Sandoval’s story is evidence that music doesn’t
need to be Formerly Known-like to point people
toward God, and, as a result, help people like
Sandoval walk out their faith.

Michael Keller, pastor at RUF City Campus Ministry in
New York City and son of famed Presbyterian
apologist Tim Keller, is a long-time mentor of
Mineo’s. They met while Mineo attended The City
College of New York, and have since spent many
hours discussing what it looks like for a Christian to be an artist.

“I think Andy’s later stuff, you can see all of the
Christian principles that are in there and that are
informing his art,” Keller said. “It’s not as explicit,
but that doesn’t make it any less true. I think
people assume that if it’s not explicit, then you must
be ashamed or it’s not true. It’s the equivalent of an artist who used to only draw pictures of the cross,
and he stops drawing pictures of the cross.
[Instead], he draws pictures of sunsets and
sunrises, and you’re like, ‘You must be ashamed
because you’re not drawing pictures of crosses
anymore.’”

Keller believes it’s a misconception that unashamed
art must be explicit.

“If you want me to be brutally honest,” he said, “I
think Christians have in general a low view of art.
Unless it’s explicit in art, it must not be real. We
don’t have a place for nuance. … I think that you’re
not really understanding the meaning of art. Art is
not necessarily obvious in every way. Somebody might say, ‘I want to see it obvious because it helps
me think through my own faith,’ and that’s fine. But
you shouldn’t necessarily demean Christian artists
who don’t make their art obvious.”

Keller added that all art by Christians needs to point
to Christ, but the degree to which it does makes an
artis t no more or less unashamed. Mineo agrees

“I’m actually sharing my life and how the Bible and
my relationship with Jesus are infused into my life,”
Mineo said. “Therefore, I’m speaking from a
worldview, not just regurgitating John Piper
sermons or saying other witty things I’ve heard
pastors say. I think my relationship with Jesus is in me, and it informs everything that I do — the way I
live my life, the way I do marriage, the way I do
relationships, the way I do money, the way I do
time; it informs all of that. When I speak as a
Christian, and the gospel has deeply informed all of
who I am, I can speak about any topic … and that perspective that I hold is going to come through in
it — hopefully accurately.

“But when people are just like, ‘I want you to say
particular words in your music,’ then you go make
that music. I want to communicate what I think is
good art, and that in and of itself is this whole, long
conversation. What is good art? That’s going to be
different for each person.”

While the message and goal may have not
changed, the change in method was indeed
uncomfortable.

“I think my faith has gone from a very black and
white faith to a faith that understands some things
are gray and there are nuances,” Mineo said. “There
are some things that are delicate and sticky and
touchy, and it takes wisdom and craftiness to
navigate those things. … A maturing faith is able to stand inside of tensions and understand there are
nuances. A young and adolescent faith is going to
just come in, make everything black and white and
bulldoze and leave a wrecking trail behind. It’s
taken burning bridges and hurting people to learn
that.

“There’s been multiple things, like when you’re
building a relationship with somebody and you
jump into immediately sharing the gospel with
them too soon. I’ve been like, ‘Man, I’m ‘bout to
give them this gospel!’ And I go to my neighbor or
someone I’m just meeting … and I dive into just preaching the gospel at them. Some Christians
would be like, ‘Yeah, that’s the way you do it! You
just kick in the door, and you shove that gospel
down their throat the first time you meet them!’

“Then, I would do that, and then I’d realize, ‘Oh, I’m
going to see this person over and over again, and
now they think I’m a religious fanatic because the
first time I met them, I tried to solicit them and
convince them to totally change the way they’re
living their life and live it the way that I see that they should. I built no trust, no relationship with this
person, no opportunity for me to have an actual
stake in their life, but I’m asking them to make a
complete life change. Those are the times when you
realize, man, approach is important. Not just your
message, but also your method is important, and that’s nuanced.

“Some people, God is clearly calling you in that one
moment that you meet them for the first time, the
first second is when you share the gospel with
them. Other people it’s, let them see the gospel
through your life over time … The Bible’s clear:
Some plant, some water, but God grows and gives the increase. If I see my entire life as planting seeds
and sharing the gospel implicitly and explicitly,
then there’s going to be room for there to be
nuances.”