Story: How I Was Almost Killed For Converting To Christianity In Northern Nigeria 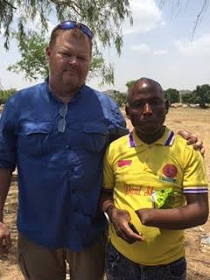 Brent Hail, a Jacksonville resident and Tyler
firefighter recently traveled to Nigeria for the first
time to visit with missionaries who are supported
by Fellowship Bible Church in Jacksonville. He and
the missionaries traveled to northern Nigeria to
pick up Musa who was allegedly prosecuted and almost killed after converting to Christianity. Read
his story below:

The day started pretty early because we
had a long way to go. We were going to
pick up a man in a town in northern
Nigeria. The story had gotten back to us of
an amazing way God had delivered him at
his village from being killed for his faith. As the van left with me and five other travelers,
I wanted to see God in an amazing way. I
wasn’t disappointed.

This story is about a man named Musa,
who, this past January, almost lost his life
for converting to Christianity. As we headed
northeast in northern Nigeria, I could tell
that we were heading into areas that were
almost completely Muslim. We were traveling to the village where it happened. I
had heard about Musa and his incredible
story through one of the missionaries our
church supports.

Four hours later we finally pull up to the
spot where it all happened. Musa walked us
to the mud house where it all took place. He
began by telling us that two years ago he
became a Christian as a result of one of the
outreaches to his village.

Most of the village was either pagan or
Muslim, so when he converted he was seen
as an outsider of sorts. Let me say quickly
that Islam is not the enemy here. There is a
much bigger enemy who uses Islamic
radicals to carry out horrible things against people.

After his conversion, Musa told people in his
village that he was a Christian and that he
wanted them to know that Jesus truly cared
and loved them. The leaders of the village
didn’t like that, so they were going to make
it difficult for him.

They took his wife and married her to
another man in the same village. They then
approached him with a large sum of money
wanting to denounce his faith and come
back to Islam, but Musa refused. They then
brought him several women for the same purpose, but he still refused.

One night, two people from his village came
to his mud hut at midnight, kicked in his
door and told him that this was going to be
his last night on earth. One of them had a
gun. As the man fired, Musa reached
around to feel the exit hole from the bullet, but it wasn’t there. The man was standing
approximately five feet away, so surely he
couldn’t have missed.

As Musa was crying out to Jesus to save
him, the man then swung a machete. Musa
put up his left arm in defense, and the
machete cut off his left hand. The man
swung again, this time cutting off his right
thumb. Musa said he suddenly felt a surge of power come over him, and he was able
to punch the guy with the arm, which was
missing his hand, knocking him down.

Musa ran to his neighbor’s house where the
wife answered the door, and fainted after
seeing what had happened to him. The
husband then took him to the Christian
church that was about a half mile away to
seek help from the pastor. They carried him to the hospital, which was an hour and a
half away, where they finally were able to
care for his wounds. From the time his hand
was cut off, to the time he was sewed up,
sixteen hours had transpired.

At times, doubt creeps in to invade my faith.
I don’t want it there, but it still manages to
make its way in. I believe God understands
this, and allows amazing stories like Musa’s
to cross our paths to let us know that there
is a God who truly loves and cares for us. It strengthens my faith all the more from
seeing the way that God delivered Musa.

I was able to see the amazing power of God
work through Musa, because he told us
that he loves and forgives the men. He also
has had four men from the village come to
him secretly, telling him that they had
placed their faith and trust in Christ because of his witness. It has opened my eyes to see
that God cares as much for the Muslims as
he does for me. I thank God for allowing
me to see this personally and to meet Musa.
We can all learn a lot from his story.”