STORY: Sho Baraka Transcends Political Parties With The AND Campaign 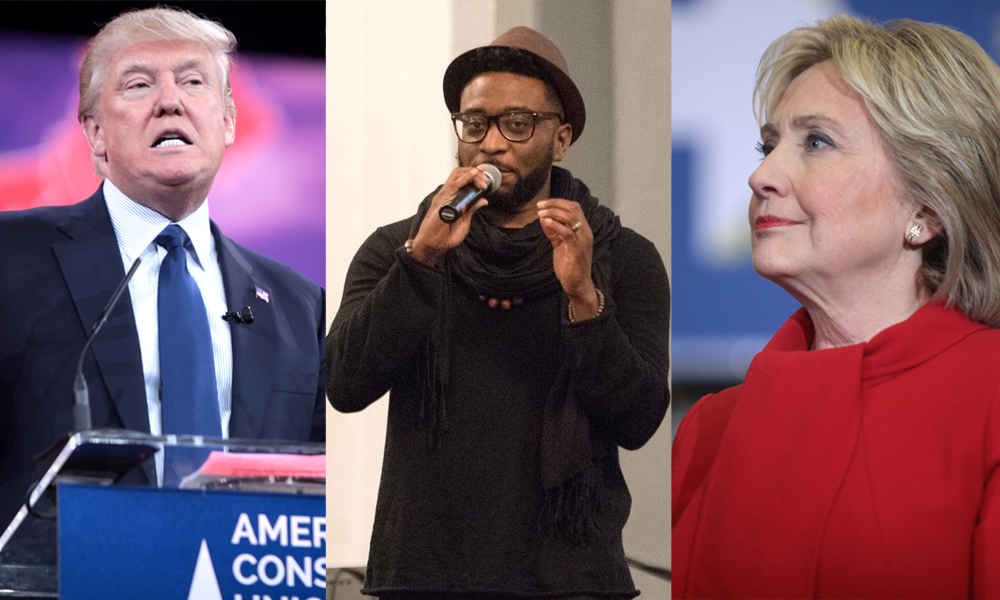 This is a headline the Washington Post recently ran that implies Evangelicals
typically identify with the values of at least
one presidential candidate, which is
typically Republican. But with Donald Trump
and Hillary Clinton likely to face off in
November’s general election, many Christians feel convicted to not vote for either major-party nominee.

Sho Baraka is used to this feeling.

“I find it pretty amusing that, now, a lot of
Republicans and conservatives are feeling
the plight of individuals that I’ve always ran
with,” the Atlanta-based artist said.

Instead of “sitting around complaining,”
Sho and attorney Justin Giboney co-
founded an answer to this plight, The AND Campaign, which launched on February 27.

“If you’re tired of being forced to choose
between social justice and biblical values,
then you’re ready for a new voice with new
thinking, new engagement and new politics
— a new campaign,” Sho said in The AND
Campaign’s introduction video.

“I studied public administration and policy
in school at the University of North Texas. I
grew up in a very politically active family. My
mother was very active in the Black Panther
Party, so we’ve always had conversations
and affections toward the plight of people,” Sho said.

“And if you care about people, you
obviously care about the laws that govern
people. And if you believe politics touches
every aspect of life, you have no choice but
to get politically involved, so though I’ve
never had any official political background — I’ve never ran for an office; I’ve never
pursued law school — I have always been
concerned about the policies and the laws
that govern our society.”

This interest is not news to fans of Sho’s
music. Few albums have been as acclaimed
in Christian hip hop as his last project, Talented 10th, since its release in January 2013, and his latest venture springs from
the heartbeat that wrote the 14-track LP.
The following are his first words on
Talented 10th.

Yeah, I feel the pain of a 70’s soul singer /
Who just saw the death of one of its soul
leaders /
I wanna sell records but yet I feel eager /
To write political tunes that give a certain
finger

Read an excerpt of Rapzilla’s interview with
Sho about The AND Campaign below.

Is The AND Campaign a political party?

The AND Campaign is not a political party. …
We transcend political parties. There are
individuals who are apart of our campaign
who fall both on the left and the right, but
ultimately — and this is why we say we
transcend — we hold very tightly to biblical values.

We try to deemphasize party and ultimately
challenge people to think about the
ideologies as they stand by themselves
without associating them to a party.
Because, as Dr. Carl Ellis says, when you
marry a political party, they will pimp you.

What we want to do is get people to look
beyond the partisanship that our society is
so deeply connected to and even more so
about the policies. You can be a Republican
or you can be a Democrat, but if you feel like
your party is perpetuating some policies that you feel aren’t biblical and aren’t
beneficial to society, you should speak up.
You should do something and do as much
as you can to change that without feeling
like you have some irresponsible loyalty to
a party that’s not serving your true foundation as a Christian.

How are you approaching this upcoming election, or thinking through politicians and how to use your vote as a Christian with everything The AND Campaign stands for? A lot of Christians feel stuck, “Ah, I don’t want to vote for Hillary or Trump.”

What’s interesting is how I’ve been in this
space for as long as I can vote. As long as I
could vote and I’ve been a Christian, I’ve felt
this tug, this bifurcation of having to choose
my values versus the things that I’m
passionate about when it comes to issues in our community. I find it pretty amusing that,
now, a lot of Republicans and conservatives
are feeling the plight of individuals that I’ve
always ran with.

For me and a lot of my friends, we’ve felt this
way forever. As African Americans and
minorities, we felt this pseudo-allegiance to
the liberals and Democrats because the
general population of African Americans
have voted that way. But when you look at the values that we’ve had as Christians,
people who seemingly would hold to more
classical values, that doesn’t line up with a
lot of the Democratic stances.

But then, if you say, “Well, I’m just going to
vote my Christian values,” you look at a lot
of the conservatives on the right and you’d
say, ‘Well, man, they lack a lot of
compassion when it comes to issues of
justice; when it comes to issues of economics, and I don’t want to just throw
the pain of a people that I’ve grew up with
out the window just because [Republicans]
have tied themselves to this Christian ideal,”
which I would argue is not the Christian
ideal.

That’s where I’ve been for the longest time.
This is not a new posture for me. And so this
coming up election, I want to do what I’ve
always done — not want to concern myself
so much with the presidential election,
though I’ll probably vote for a third party, but concern myself with those individuals
who are going to be making statewide
decisions, federal decisions and local
decisions that I think are just as impactful as
deciding who our president is.

Can you give an example of local elections being just as impactful as federal ones?

Yeah, there are individuals who are running
for judge seats here in Georgia, and they
have some terrible records. … We have this
habit of voting straight ticket, but at the end
of the day, we got to think, “What’s the
track record of this individual?”

I’ll even give an example that’s national.
Baltimore is a city that has seen a lot of
struggle. It’s been plagued with all kinds of
riots dating back to the 60’s and 70’s, and,
as we know, there’s been recent riots
dealing with Freddie Gray.

Well, for instance, just because the
overwhelming population is African
American, they seem to just vote
Democratic. The mayors there for the last I
don’t know however long [since 1967] have all been Democrat. But we see that if
we just vote straight ticket, it hasn’t
changed Baltimore.

If we continue to have Democratic mayors
in Baltimore who don’t really care about the
people that are putting them in office, then
maybe we need to start reevaluating how
we vote and why we vote, and not just vote
straight ticket and starting thinking, “Alright, well maybe we need to start
thinking outside the box.” That doesn’t
necessarily mean vote for a Republican, but
just because somebody may look like us
and just because somebody is in a party
that we’re familiar with doesn’t mean they’re gonna actually serve our best
interests.

Ultimately, we don’t really, really dig into the
policies of those individuals who are on the
lower level.