T.D Jakes: Americans Must Unite In Solidarity After Orlando Massacre Just like 9/11 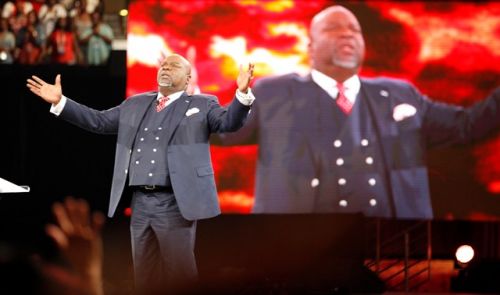 Influential megachurch pastor Bishop T.D.
Jakes compared Sunday morning’s gay
nightclub massacre in Orlando to the killing of
nine Christians last June at the Emanuel AME
church in Charleston, South Carolina, and
asserted that the Orlando shooting should be identified as both a hate crime and act of terror.

In response to the news that 49 people were
murdered and 53 others wounded in Sunday’s
shooting at the Pulse nightclub, Jakes, a
prominent Christian author and senior pastor
of The Potter’s House in Dallas, posted a video on Monday calling on all Americans to unite in solidarity with the LGBT community.

“I wanted to take a moment to share a
statement with you that is on my heart and on
the hearts of many, if not millions of Americans
around this country. Our heart goes out to
Orlando as you face this devastation that
occurred this weekend,” Jakes said in a short video posted to his Facebook page.

“Forty-nine people, young people at that, have
lost their lives in this senseless act of violence. It
is just mind boggling how something like that
could occur right in our country — 53
wounded and recovering, many in the hospital
and a few have gone home but still are suffering senselessly [from violence] that they
did not deserve.”

Just as Americans across the United States came
together in solidarity after the terrorist attacks
on September 11, 2001, Jakes called on the
country come together following the shooting
in Orlando.

“There has been a great deal of talk about this
terroristic act that has occurred of such
mammoth proportions,” Jakes continued. “It is
the second-largest travesty to hit this country
as an act of terrorism since 9/11. [September
11th] brought us together in solidarity. I pray that we will stand together.”

As Sunday’s lone shooter has been identified
as 29-year-old Omar Mateen, who allegedly
pledged allegiance to the Islamic State terrorist
organization, much has been made in the news
about whether to call the deadliest mass
shooting by a single gunman in United States history a hate crime or an act of terror.

“There has been some discussion as to
whether it is a hate crime or not. Really, it’s
both,” Jakes explained. “But whether you are
hated as African-Americans or hated in South
Carolina — simply going in to have prayer on a
Wednesday night — or whether you are part of the LGBT community and hated because you
decided to go out on a Friday or Saturday
night, you ought to be able to leave and go
wherever you want to go and decide to go
without fear of losing your lives by some
extreme person who takes into their own hands to take lives senselessly.”

“We stand with you, we hurt with you and we
bleed with you,” Jakes added. “I love Orlando.
I have been there many times, hosted many
conferences there. It’s a great city, but right
now, you are a grieving city. So, we stand with
you, we pray with you and we love you. I just wanted to say to you, ‘Hang in there. We will
get through this in some kind of way
together.'”.