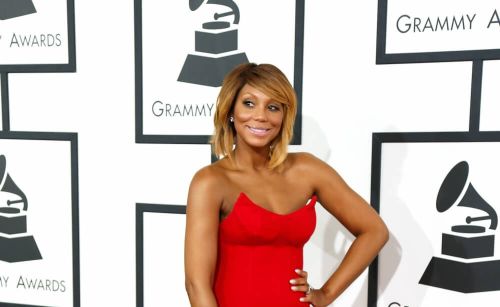 Tamar Braxton is revealing just how much scripture helps her cope with the loss of people in her life.

The 39-year-old “If I Don’t Have You” singer, who refers to her fans as “Tamartians,” took to Instagram to apply some scripture to the topic of unhealthy relationships. In a message to her fans, Braxton referred to Joel 2:25 which states, “I will restore to you the years that the swarming locust has eaten, the hopper, the destroyer, and the cutter, my great army, which I sent among you.”

“…..So my #tamartianfriends you may miss the person but good riddance,” she wrote on Instagram before thanking fellow singer Durrell “Tank” Babbs for inspiring her to share the message. “Thanks so much @therealtank for that word. Now I must go find me a corner! I’m gonna put a praise on it!! #wonthedoit.”

While Braxton didn’t detail who the message applied to in her life, her name has been circulating in media reports about her allegedly ending a friendship with her close friend Toya Wright recently. After Braxton was fired from the daytime talk show “The Real,” Wright appeared on the program to promote her book In My Own Words… My Real Reality.

However sources like BET are reporting that the move upset Braxton, which Wright seems to have been cryptically commenting about in her memoir.

“My friend was on the talk show for what I believe was two seasons and I was never able to go on there. After my friend was fired, my publicist was able to get me on the show, which I found to be stranger,” she wrote. “I never had a convo with my homegirl about what happened to her and how she ended up leaving the talk show. All I knew is that she no longer worked there.”

When Braxton left “The Real,” Wright was able to appear on the show much to her excitement. However, she later realized that the appearance resulted in Braxton unfollowing her on social media and simultaneously ending their friendship.

“Little did I know, when I was done with the show I was gonna lose a friend and get unfollowed,” Wright wrote, according to BET. “It was news to my ears as I logged onto my social media accounts to see that I was tagged in all kinds of posts saying that myself and another friend were unfollowed for going on the show.”

“Just a word for some of you who feel like restoring unhealthy past relationships! Some of those people desired to take your life or wanted to live your life,” he wrote. “If the people around you don’t add value and purpose to your life then you’re around the wrong people! Ask God to show you who belongs and to take away the ones who don’t! Watch how swiftly He works.”

The singer went on to share his own experiences with God moving people out of his life.

“I’ve never kicked anyone out of my life. They’ve always done things to walk themselves out of it,” he wrote. “Couldn’t understand it at first but I noticed an elevation every time it happened. The weight was gone that was keeping me from climbing higher! He has a plan and it’s a good one..Trust Him..”