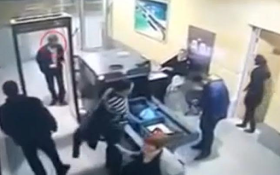 This is an article written by freelance reporter,
Ihechukwu Njoku. Read below:

Despite his penchant for predicting
disasters, Nigerian ‘Prophet’ T.B. Joshua has
finally unveiled a prophecy with ‘good
news’.

A video has surfaced online claiming Joshua foretold the hijack situation that unfolded in Egypt in the early hours of Tuesday 29th March, countering insinuations that the cleric’s controversial predictions only concern ‘doom’ and ‘gloom’.

“I am seeing a balloon – it was hijacked and people were inside,” Joshua is seen telling his congregation in an undated video, describing a scenario that would result in ‘Breaking News’ worldwide.
“But at the end of the day, they were able to rescue the balloon and the people… they will not be able to blow anything,” he continues, followed by heavy applause from the congregation
Joshua then led his members in a prayer of thanksgiving for the impending ‘rescue’ and ‘victory’. 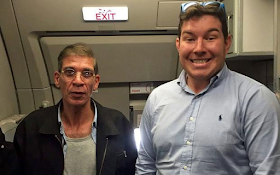 The prophecy allegedly concerns the explosive events that occurred when a man hijacked EgyptAir flight MS181 carrying at least 55 passengers from Alexandria to Cairo on Tuesday morning, forcing it to land in Cyprus.
Most passengers were released immediately but at least seven people, including crew members, were forcibly kept on the plane by the hijacker who claimed to be wearing a suicide belt which he threatened to detonate.
The crisis eventually drew to a conclusion several hours later as the remaining hostages began to cautiously emerge from the plane, one making a dramatic jump from a cockpit window.
The suspected hijacker then appeared with his hands up, subsequently being arrested.

Joshua made headlines for another prediction last week when Emmanuel TV’s official YouTube channel released a video claiming he predicted the tragic terrorist attacks in Brussels, Belgium which led to the deaths of over 31 people.
Malawian President Peter Mutharika also publicly mocked Joshua for allegedly predicting his impending death, although no substantial evidence was provided to show such a prophecy was ever made.