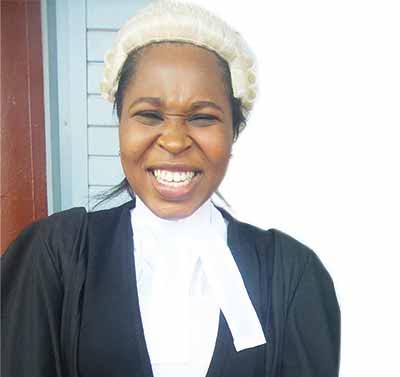 Serah Oyindamola Joshua, is the first daughter of
Pastor T.B. Joshua. She was called to the Bar this
week in Nigeria having successfully completed the
September 2015 Bar Final Examinations at the
Nigerian Law School. In an exclusive interview
with The Guardian, Serah revealed that she will also be called to the bar in New York in January,
having passed final examinations in November

“I’m grateful to God, my family and friends,
who have been of help to me. I am humbled
and privileged to have succeeded. I am
privileged and fortunate to be the daughter
of such a humble and great man of God
called TB Joshua. He is someone I look up to because my father is a man of God and he
has been able to guide me every time I need
him. I am so humbled to be his daughter. He
has been a good guide. Thus, I can’t afford
to disappoint him and God, because to
whom much is given, much is expected.” Serah told The Guardian

How does she react to comments about her father?
She says,

“He is a true example of humility. I have
seen so many character traits in him that are
worthy to emulate. As a father, he is the best
father anybody can pray to have. I am not
just saying that because he is my father; this
is just the truth. Also, it’s not what I think about him or what people think about him
that counts but what God says about him.”
She adds, “That’s why I said he is a true man
of God and it’s not what people say that
counts but what God says. Everybody has
the right to air his or her opinion but God’s opinion counts most.”