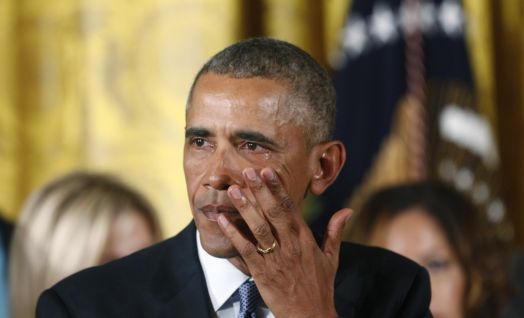 U.S. President Barack Obama wipes away tears while talking about Newtown and other mass shooting during an event held to announce new gun control measures, at the White House in Washington January 5, 2016. The White House unveiled gun control measures on Monday that require more gun sellers
to get licenses and more gun buyers to undergo background checks, moves President Obama said were well within his authority to implement without congressional approval.

A tearful President Barack Obama cited a quote from Jesus Christ in the Bible as he pushed tighter gun control legistlation in America, reflecting on the many shooting tragedies the country has suffered during his years at the White House.
In his emotional speech before the nation on Tuesday, Obama recalled massacres such as the 2012 Sandy Hook Elementary School tragedy where 20 first- graders were killed, as well as more recent incidents, such as the December death of a 15- year-old high school student who sacrificed his life to save three girls from gunfire.
Zaevion Dobson, a sophomore
football player at Fulton High School in Knoxville, Tennessee, died the week before Christmas after he went
to a friend’s house, diving on top of three girls to shield them from bullets fired by suspected gang members.
“He gave his life to save theirs, an act of heroism a lot bigger than anything we should ever expect from a 15-year-old. ‘Greater love hath no man than this, that a man lay down his life for his friends,'” Obama said, quoting Christ’s words as found in John 15:13.
“We are not asked to do what Zaevion Dobson did. We’re not asked to have shoulders that big, a heart that strong, reactions that quick. I’m not asking people to have that same level of courage or sacrifice or love. But if we love our kids and care about their prospects and if we love this country and care about its future, then we can find the courage to vote,” Obama continued in his remembrance of the young man.

“We can find the courage to get mobilized and organized. We can find the courage to cut through all the noise and do what a sensible country would do. That’s what we’re doing today, and tomorrow we should to more, and we should do more the day after that, and if we do we’ll leave behind a nation that is stronger than the one we inherited and that is worthy of the sacrifice of a young man like Zaevion,” he said.
The Associated Press noted that Obama used his presidential powers to tighten sales of firearms across the country, and laid out plans to expand background checks on perspective gun buyers.
Obama’s attempts in previous years to pass similar legislation has failed at Congress, and his move was again heavily criticized by Republican opposition.
House of Representatives Speaker Paul Ryan claimed that Obama’s executive orders “undermined liberty,” promising that they will be challenged in court, BBC News noted. “Rather than focus on criminals and terrorists, he goes after the most law- abiding of citizens,” Ryan said.
“His words and actions amount to a form of intimidation that undermines liberty.”
GOP presidential candidates, including Donald Trump, Sentaor Ted Cruz and former Florida governor Jeb Bush all suggested that they would repeal Obama’s executive actions.

Retired neurosurgeon and fellow candidate Ben Carson echoed those thoughts, and said in a statement on Tuesday:
“Any executive order President Obama signs that regulates firearms transactions will merely regulate the behavior of law abiding citizens,” Carson said.
“Criminals who commit crimes with guns will continue to operate outside of the law. These actions have everything to do with advancing the President’s political agenda and little to do with actually protecting American citizens.”