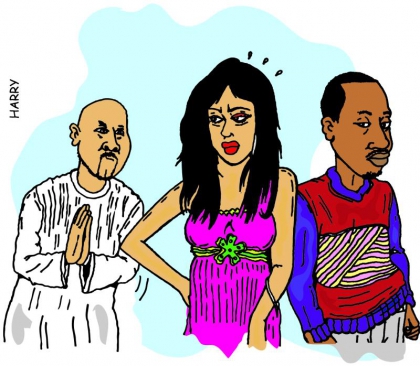 Jude was the first and last boyfriend I ever had before I got married to James.

We were so into each other that every one that saw us together thought we were going to end up together.

We ran the race of ICAN, ANAN and other accounting professional courses together.

He knew too well that being a carreer woman had been my aim since the start. I had wanted to practise on my own although working with a good firm before starting mine wasn’t that a bad idea.

I got married to James by divine intervention because along the way, I met Christ and He led me to my BEST!

One day, the day I will never forget, I was shopping at the Men’s section of Eko Mall when my phone rang and my husband asked me to meet him outside.

He was supposed to be at work!

I saw him close to his Lexus jeep but with a friend I had not seen in like five years of our marriage- Jude!

My crush! My first love!

My heart craved for that special hug that he always gave me then. His warm, masculine hug!

“Jude!” I exclaimed happily and I really couldn’t hide my joy as he came close to me.

“Can I?” He asked my husband as he stretched his hands to hug me.

“C’mon. My hubby aint a jealous man. Hug me!” I was almost screaming when he nit only hugged me but swirled me up in the air while I screamed for him to put me down.

It was awesome and thrilling!

He just knew how to make my heart burst open with pleasurable excitement!

After exchanging pleasantries, I went to my husband’s side and he smiled at me lovingly as he pecked me.

His smile could calm a stormy sea!…hehehehe
“I met him at the park and he said he wants to see you so badly that I had to trace you here wifey” My husband said and I smiled.

I turned to look at Jude.

He was looking all fresh and well fed. There was no sign of the economic melt down on him at all.

“Erm, I am now the Accountant General of Pearls Agency, Worldwide” He said sweetly, slightly licking his lower pink lip.

“What!” I exclaimed after my heart had stopped beating for a while

That had been my dream agency!…Either Pearls or my own establishment!

I had submitted my CV severally to the company to no avail and James had told me that I should pray on to God to open doors for him so he could set me up. I had been trying on my part too anyways.

But its been five years and nothing had happened!

“The company needs a chartered accountant to occupy the post of a senior accountant 1 and I had searched and searched for your contact details to no avail…until I jumped into our bros today” He said and I was excited.

Was he going to choose me?

My heart raced on.

“Would you mind taking the post on? You have lots and lots of benefits. You and I would have enough time to cruise the whole world on a professional spree! We would achieve a lot together…You and I…” he kept on saying and I smiled, being carried away by his pink lips.
I turned to look at James and he was still looking at me, smiling as he knew how to do best.

“Don’t mind him o. Very naughty guy he is!” I said to James and the latter smiled, still looking into my face

“Do you want the job? Just a phone call from my end would give you the job. Just say yes!”
I was shocked and awed at the same time!

Was that supposed to be a blank cheque or something?

I was getting my desires on a platter of gold?

As I was processing how to give a resounding yes in my head, I heard it so calm and cool and the whole wide world stood still for a while.

“No! She doesn’t want the job!” James said and just like the slow motion in Korean movies, I slowly shifted my neck from Jude and looked into my husband’s cool face.

“I wasn’t asking you Mr. James. I know men like you never want their wives to be better than them. I was