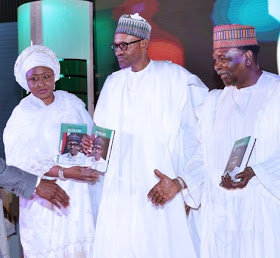 Read his piece below…

The book ‘Muhammadu Buhari-The Challenges of Leadership in Nigeria’ by Professor John Paden is not only an intellectually lazy work, it is also a fallacious document hastily put together to paint the protagonist in the borrowed garb of an effective leader who is cleaning the Augean Stable of misrule and corruption in Nigeria, but my question is this-how can you fight corruption with lies?

I have taken my time to x-ray the book and I cannot help but agree with the national leader of the ruling All Progressive Congress that Paden has done a great disservice to the truth. If I were Paden, I would consider a career in fiction writing. His talents are much better suited for that than to scholarly and investigative work.

On page 52 of the book, Professor Paden declares that Dr. Goodluck Jonathan declared for the April 2011 Presidential election on Saturday, 18th of September 2011.

But for a man who was a Rhodes scholar at Oxford University, Paden did not show much scholarliness because if he did, he would have established that Dr. Jonathan made world history by being the first ever Presidential candidate to make his declaration on the social media platform, facebook, on Wednesday the 15th of September, 2016, a feat which was featured on the New York Times, the Washington Post and in several international news media.

If this was the only error in the book, one could forgive Paden, but the errors go on and on.

On page 55, Paden called to question Jonathan’s handling of the economy but then in page 60 he admits that the 7% GNP growth Nigeria attained under Jonathan was “impressive”. Does Paden suffer from a split personality? Here he is calling into question former President Jonathan’s ability to manage an economy that he himself admits generated an impressive growth yet he is praising a President Buhari under whom Nigeria has gone into recession. I don’t get it Paden!

Perhaps Paden should have written a book singing Jonathan’s praises instead of President Buhari’s!

Then he attacks Dr. Jonathan in page 55 over the 2012 attempt to remove fuel subsidies and pointed to the street protests that broke out in reaction, but curiously failed to mention that such protests were instigated and led by the then opposition members including President Buhari’s former running mate, Pastor Tunde Bakare, who was openly at the fore front of the protests and Malam Nasir Elrufai, who coordinated activities during the Occupy Nigeria protests. This is nothing short of intellectual dishonesty.

In page 59, Paden says ‘President Jonathan had signed a pledge in 2011 to run for only one term’. This is just a lie and betrays the fact that Professor Paden might have replaced investigation with gossip as a means of gathering information. I make bold to say that if Professor Paden can produce a copy of the signed pledge then I would give him a million dollars!

The above is nothing short of libel. But before he is made to answer for his lies in court, let me ask Paden a simple question. If what he wrote about Dr. Jonathan looting the treasury is true, then how come Nigeria was able to have what he himself agrees was an ‘impressive’ economic growth and how come Nigeria made progress on the annual Transparency International Corruption Perception Index?

On page 67, showing his inability to give credit to whom it is due, Paden accused Jonathan of appointing partisan and dishonest Resident Electoral Commissioners for States so they could assist the People’s Democratic Party (PDP) rig elections but praised INEC Chairman Professor Attahiru Jega for his honesty. What he failed to mention is that it was President Jonathan who nominated and appointed the honest Jega without having ever met him and that it is this same honest Jega that was fully in charge of posting officials to states to serve as Resident Electoral Commissioners and who (along with his board) had power to recall and discipline any REC.

Then in page 68, Paden outdid himself as a liar when he said “faced with these results, would Jonathan concede, or would he challenge the results in court?”

Paden continues on his lying spree by saying inter alia that ‘several former African heads of state held private meetings with Jonathan….they insisted…that he accept the results”. Not yet done with his fallacies, Paden continues “there was considerable international pressure on Jonathan, including by the Archbishop of Canterbury and Western Diplomats”.

All these are the figment of the imagination of either Paden or his sources.

To prove that Paden is a liar, I will quote Mansur Liman, the editor of the BBC Hausa Service in Nigeria, who was at the INEC Elections Result Center in Abuja WHILE results were being released.

Mr. Liman testified verbally on the BBC Hausa service and in writing on its website that while results were still being AWAITED and BEFORE INEC had declared Buhari as winner of the election, he had placed a call to the Buhari campaign and testified that his contact within the Buhari campaign “told me that Gen Buhari had just received a phone call from his rival, in which the president conceded and congratulated him.”

Testifying further, Mr. Liman said that the report he received indicated that “the president (President Jonathan) took the decision to make the call without consulting anyone. They told me that if he had talked to some of his advisers, they would have objected.”

This is a direct testimony from a man on the ground with timelines and records that can stand up in court. Are we to jettison his eyewitness and substantial documentary evidence for the unsubstantiated lies of Paden?

But even without taking into account Liman’s testimony, I traveled to London after making calls to one of the Archbishop of Canterbury’s closest and most senior aides and after a face to face interview with one of the people involved I have established beyond reasonable doubt that the Archbishop of Canterbury DID NOT Call Dr. Jonathan to mount pressure on him to concede. Paden lied!!

This is a direct quote from an official in the Palace of Lambeth when I interviewed him on Paden’s claims-“that is nonsense. The Archbishop did not call to put pressure on President Jonathan to concede. He called AFTER President Jonathan had conceded to congratulate him for conceding!”

I urge Nigerian newspapers to reach out to the Palace of Lambeth to investigate John Paden’s claims themselves. Both Paden and his source are liars!

If anybody has a history of problems conceding when he was defeated, that person is none other than President Muhammadu Buhari himself. In his three previous unsuccessful attempts at the Presidency, not once did Muhammadu Buhari ever concede much less congratulate the victor. Instead, his comments when he lost were at best uncharitable and at worst unpatriotic!

But oh, there are more lies in Paden’s book.

In page 195, Paden lies again when he said that in May of 2016 while Dr. Jonathan was in the US, he had to “cancel some of his public engagements because of protests by Nigerians living abroad”.

This lie is so easy to disprove. Dr. Jonathan did not cancel any events. He could not attend two events in California and he asked me to represent there. The two events were his Keynote speech at the California State University in Sacramento and his leadership award by two California cities.

The truth of the matter is that Dr. Jonathan took ill and it was the officials of Nigeria’s mission in New York who actually took him to hospital. Both Dr. Paden and President Buhari can call the head of Mission in New York to confirm if this is true.

Let me end by saying that no matter how close Professor Paden thinks he is to President Buhari, he cannot be as close to him as the President’s own wife and mother of his kids.

After he finished giving his procured and false whitewashed verdict of the President, the President’s wife gave the real verdict on President Buhari just a week ago as follows: “if things continue like this up to 2019, I will not go out and campaign again and ask any woman to vote like I did before. I will never do it again.”

No wonder that while Paden devotes over 60 pages of his 284 page book to former President Jonathan, he only devotes a few sentences in two pages (36-37) to the President’s wife, Aisha Buhari. Of course, he tried unsuccessfully not to call too much attention to the one person who could disprove all the lies in his book. Thank God for the courage of Aisha Buhari.

Omokri is the founder of the Mind of Christ Christian Center in California, author of Shunpiking: No Shortcuts to God and Why Jesus Wept and the host of Transformation with Reno Omokri