The Mistake Of Lagos Lekki Flood 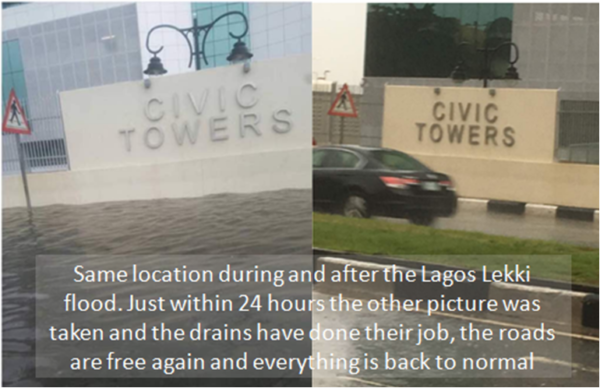 It rained non-stop in Lagos for 5 consecutive days and hell was let loose. Our mega city’s highbrow area was flooded temporarily and the social media went agog with mockery and ridicule.

How did we get here? How did we become a people who laugh and merry at the misfortune of others? Where is our conscience as a people

What happened in Lekki and Victoria Island has happened in other parts of the world. It has happened in America and Europe, so it isn’t peculiar to the Third World or dependent on the revenue a country or state generates internally. Sadly, this is a point those who base their argument on the money Lagos rakes in daily, monthly and annually clearly miss.

As recent as 2016 it snowed heavily in the United States and governors in at least 10 states declared states of emergency. Travels were disrupted in at least five major airports, over 6,000 flights were cancelled and in North Carolina alone, more than 114,000 homes lost power

The Lekki/Victoria Island flood was not as severe as this, yet the hornet’s nest was stirred. Some parts were under, but that lasted only for some hours. Rain, snow and fog are part of the natural weather cycle and they may overwhelm infrastructure once in a while. Adverse weather warnings are still being issued in the United Kingdom and other parts of the developed world. The warnings either ask citizens to evacuate an affected area or to stay indoors. The entire east coast of the United States, including New York, was snowed in for about 3 days earlier this year. There were no flights, schools and offices were closed and movement was restricted to only emergencies because of the extreme weather conditions. Maybe it’s time Lagosians recognized such overwhelming periods and stay at home while the drains do their job before life returns to normal which, in the case of the recent Lekki flood, had happened by the following morning
It’s also needless to fan embers of a class war. Those viewing what happened with coloured lenses of class are making a big mistake and they do so at their own detriment. The same droplets of rain that fall on the roof of the poor fall on that of the rich. So many businesses are headquartered in the highbrow area of Lagos. Most people who talked derisively at those affected live on the mainland and commute daily in traffic to and from island offices
Lekki does not exist in a bubble. Victoria Island is not an island entire of itself; it is a part of the main. If Lekki and Victoria Island sneezes, the whole of Lagos catches cold. If Lagos catches cold, Nigeria will be bedridden and our economy will suffer for it.
There is also a human angle to it and we all have our roles to play. We block our drainage systems with refuse, pollute the air with fumes, deplete our ozone layer, and recently Uncle Sam pulled out of the Paris Agreement. No thanks to President Trump. We need to actively join in the campaign to embrace clean and green energy in order to reduce the chances of more extreme weather situations in the future
We should also concentrate on how to avoid flooding situations or minimize the impact if it occurs. Both the Government and the citizens have a part to play in this. As for the areas where the floods have lingered, housing developers and the local government of such areas should be asked about the adequacy of drainage infrastructure provided if any. It is a well-known fact that drainage infrastructure planning is grossly inadequate in most developed areas in the state and necessary steps should be taken by the government to address this situation.
The provision of an adequate drainage system should be complemented with a high environmental standard of constant maintenance to keep the drainages free from dirt. If the drains have been cleared after there was an indication that there will be a heavy downpour, the flood situation wouldn’t have been this bad.
Make no mistake about it.