The Power Of Positive Declaration: Joel Osteen Can Now Fly 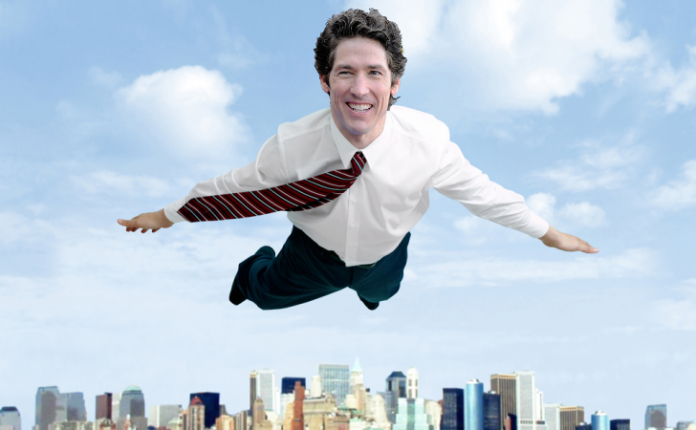 HOUSTON, TX—Joel Osteen, celebrity senior pastor
of Lakewood Church, has been proclaiming the
life-changing power of regular, vocal, positive
declarations and self-affirmations for years, and for
just as long has pointed to his own life and
accomplishments as irrefutable evidence of their efficacy.

“My primary residence has more elevators than
your house has bathrooms,” he told churchgoers
in a recent sermon. “And do you know why? It’s
because I declared it would happen. I spoke my
desired reality out loud. Right out of my mouth. For
years and years I woke up every morning and said, “I declare that I will earn such a fortune that I
will own a home that has 3 elevators. I declare that I will achieve such opulence by being the pastor of
a church. In Jesus’ name.”

He said let there be elevators…and there were
elevators. And he saw that the elevators were
good. But that did not stop America’s favorite
pastor from aspiring to new heights — literally.

That’s right. Through the power of positive
declarations, Joel Osteen can now fly.

It’s no great secret how he acquired the ability to
levitate and propel himself through the air at will.
“Ever since I was a boy, I’ve wanted to fly,” he
announced Sunday from his pulpit in front of
15,000 churchgoers and another 7 million
watching on TV. “Well I just decided one day I wasn’t going to let the enemy hold me back
anymore, and I started boldly declaring before
God each and every day that I was going to fly. I
spoke the words, ‘I’m taking the limits off of you,
God. I will achieve flight. I declare it so!’ And guess
what happened, church…”

Osteen then levitated off the stage and proceeded
to fly around the former Compaq Center which
now serves as Lakewood’s global headquarters,
above the mass of hysterically-cheering faithful, a
large smile plastered on his face.

After the service, Osteen spoke to some reporters.
“Declare your destiny out loud, that is my advice to
you,” he told them. “Take the limits off God.”

“Now, if you’ll excuse me,” he added, just before
rocketing into the sky, “I’ve got to go see about
cancelling a Gulfstream order.”