The Wrath Of God Will Visit The Children, GrandChildren Of Corrupt Politicians – Prelate Sunday Mbang Says 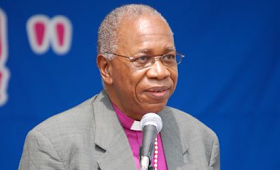 Former Prelate of the Methodist Church and one time President of the Christian Association of Nigeria CAND, Prelate Sunday Mbang, says that the wrath of God will visit the children and grand children of corrupt politicians who steal from the treasury to enrish themselves and their families.

The clergy man who recently turned 80 years old, said this in a recent interview with tribune.

“In Christianity, the Bible makes it clear that when you commit a crime, it is to the third and fourth generations. The belief with us is that they have allowed the grace of God in the New Testament to seem to have covered what is in the Old Testament – the wrath and love of God – which is also reflected in the New Testament. If you don’t repent of your sin, the wrath of God will fall upon you. People suffer in this country and what they would do is to explain it scientifically. I said it earlier that I made a prayer and someone died. That death would be explained scientifically and so the main point would be clear to the people. The fact is that once you commit sin; once you loot public treasury; once you convert money belonging to the people for yourself and family, you will suffer, your children will suffer to the third and fourth generations. When these things happen, people explain them scientifically. Nowadays if anything happens to someone, it would be blamed on either the brother, father or the mother, not knowing that God’s wrath might have fallen on the person. Every sin has punishment. What I can tell our politicians is that all the sins they have committed – corruption, hatred, killings, kidnapping, false accusations – the wrath of the God will visit them one after the other to the third and fourth generations. My prayer is that all those seeking political appointments, because the earth is the Lord’s and the fullness thereof, God is the owner of the earth. He is not an absentee landlord. He is interested in this world. So when you come and do whatever you feel like, don’t think God does not see it. He sees everything we do and He gives us the grace for what we have done right and punishment, for our wrongs. My advice to the politicians is for them to remember that whatsoever they sow, they shall reap. If they escape it, their children will not. If they do, their grandchildren will bear the punishment, whether they like it or not. You can go to prayer houses to pray, unless you repent. When Zacchaeus, the tax collector in the Bible wanted to repent, he said he would return ten times all that he had taken unlawfully. Can any politician do that? If they can do so, God can show mercy because some of them might have ignorantly stolen. Even if Buhari decides to leave them unpunished, they can’t escape from God. That is my advice to all the Christians who venture into politics. God is watching them and their family every day. Every sin they commit against that person who has gotten food to eat in his house, God will not allow them to go scot-free”he said