“There Is Cry Like Rain In Aso Rock & North”: Mbaka Raises Alarm About Buhari 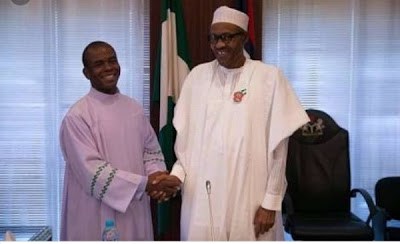 Listening to father Mbaka’s E no dey programme(held every Wednesday). He raised a serious alarm about Buhari. According to him, he secured a UK visa with his money and need Aso Rock people to direct him where Buhari is in London for him to pray for him. According to him,where he saw Buhari is very far.

He said medical care will not heal. He needs only prayer to be heal but Aso Rock people refused to show him where he is. He said the same thing happened during Jonathan’s regime where he wanted to give him prophecy but Aso Rock people did not allow him speak to him. He was saying that not tomorrow now people will say Mbaka this Mbaka that. Remember sometimes ago he said he went to pray for Buhari but Aso Rock people did not allow him see him. When he was abt leaving,some people came out from Aso Rock and said Buhari is dead. E no dey programme is a programme where sickness you come with varnishes after adoration/Eucharistic adoration.

Fellow Nigerians, I am writing based on information I heard from(currently on at Adoration Ministry Enugu Nigeria aka AMEN) Reverend Mbaka’s live programme titled ‘E No Dey Again’ held every Wednesday. Today’s own is ongoing. Here are some of the extracts of the things I heard him say……

2.Last night he was in vision.There was a meeting in Aso Rock. He was part of the meeting. Ibrahim Babaginda was in the meeting. He asked him a question about Buhari but he told him to forget it.

4.He also said that as it stands now,there is cry like rain in Aso Rock and in the north.

5.He also revealed that in the spirit world,Nigerian flag is burning.

6.According to him, within a short time what is hidden will be revealed.

7.He also said that Holy Spirit has told him to forget trying to help the situation. He said he has tried his best but people in Aso Rock did not listen to him.

8.He also said that people/the elites already have their visas on hand. That when the problem starts, It is the poor that will perish.

11.He recalled that before Buhari travelled,he was in a vision and saw him.God told him to go and pray for him but the same Aso Rock people did not allow him in.

He is still speaking.These are the few points I could grab.The church programme is still on