‘There Is Nothing Like Ethnic Or Racial Discrimination In Buhari’s Govt, He Is For All” – Fr Mbaka 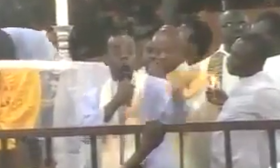 In a new message he preached in his church
recently, controversial Enugu-based Catholic
Priest, Rev. Fr. Ejike Mbaka, said President Buhari’s
administration is devoid of ethnic or racial
discrimination. According to the clergy man,
President Buhari is for everyone

Buhari is a prayer answered. The bishops
and Catholics in Nigeria prayed against
bribery and corruption and this president
came with war against corruption.
All the prayers we have been doing against
corruption, God answered that prayer through a Muslim who decided not to
discriminate. They is nothing like Religious,
Racial discrimination in Buhari’s
administration. He is a man for all”he said

According to him, if the last administration had
continued, Nigeria would have been for sale by
now

Had it been the last regime continued, by
now Nigeria would have been for sale. Who
will buy?”he said