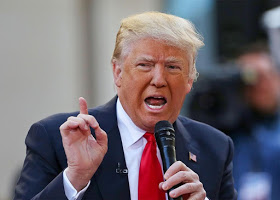 Donald Trump has warned of a World War if Hillary Clinton is elected as president and her policies on ISIS,and the Syrian conflict are implimented.

Democratic Party U.S Presidential candidate Hillary Clinton revealed during the last presidential election debate that the U.S will create no-fly zones in Syrian airspace in order to combat ISIS and also allow for peace and normality to return to the already war-torn Syria and it’s citizens.

If a no-fly zone is implemented by the U.S on Syrian airspace and a Russian jet flies on the airspace, the U.S have the right to shoot it down, a move that could cause war between both nations and Trump on Tuesday warned that Hillary Clinton would surely cause a World War III if elected as president.

“What we should do is focus on ISIS. We should not be focusing on Syria,” Trump told Reuterson Tuesday morning at his resort in Doral, Florida.

“You’re going to end up in World War III over Syria if we listen to Hillary Clinton.”

“You’re not fighting Syria anymore, you’re fighting Syria, Russia and Iran, all right? Russia is a nuclear country, but a country where the nukes work as opposed to other countries that talk,” he said.

Trump also said Clinton’s claim that he was Putin’s ‘puppet’ in the last presidential election debate was a very naive one because anyone who becomes president will have to negotiate with Russia’s president Putin in order to have World peace, but how do you do that ‘when you’ve painted him badly?

“How is she going to go back and negotiate with this man who she has made to be so evil.”

Mr Trump’s warning of confrontation with Russia echoes concerns raised last month at a congressional hearing by the highest-ranking military officer in the US military.

“Right now, senator, for us to control all of the airspace in Syria it would require us to go to war, against Syria and Russia,” Gen Dunford told the Senate Arms Services Committee.

“That’s a pretty fundamental decision that certainly I’m not going to make.”

“National security experts on both sides of the aisle have denounced Donald Trump as dangerously ill-prepared and temperamentally unfit to serve as commander-in-chief,” Clinton spokesman Jesse Lehrich said. “Once again, he is parroting Putin’s talking points and playing to Americans’ fears, all while refusing to lay out any plans of his own for defeating ISIS or alleviating humanitarian suffering in Syria. Moreover, this incendiary attack is aimed at a policy that his own running mate, Mike Pence, strongly supports.”

Trump also said that the election can’t be lost to Hillary if the Republican party had unity.

“If we had party unity, we couldn’t lose this election to Hillary Clinton,” he told Reuters.

“The people are very angry with the leadership of this party, because this is an election that we will win 100% if we had support from the top,” he said.

“I think we’re going to win it anyway.”