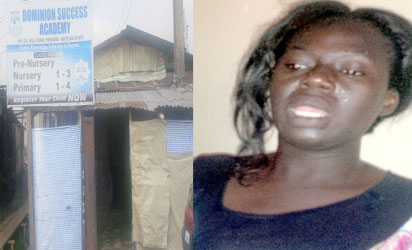 Erueke John and a photo of the deceased’s school.

The Bayelsa State Police Command has arrested one Idiesy Zikeme and his wife Eunice Zikeme for allegedly torturing Idiesy’s 7-year-old son to death at Akaba community in Yenagoa Local Government Area of the State.

kingdomboiz had reported the story on Monday after a Facebook user shared heart-wrenching photos of the deceased with different types of injuries on all parts of his body.

The victim, who was Eunice’s stepson was brutalised to death while the couple were trying to deliver him from Wizardry.

According to Vanguard, the victim’s biological mother, Erueke John said that Idiesy had tied the victim to a stake and sliced the his body with sharp objects in a bid to exorcise him.

“They killed my son in cold blood. I was told the suspects used sharp objects to slice all parts of his body in an attempt to exorcise him,” she said.

“I left the father’s house while I was pregnant with the boy, because he was beating me and was also into illegal sales of hard drugs. If he had come alone to seek the child’s custody, I would have objected because he is too violent. But the step-mother pleaded and I agreed. Many people, including the (teacher) in school, warned me but I allowed them take the child. And they have killed him for me,” the 29-year-old woman lamented.

She said that the allegation of wizardry was based on a revelation from Idiesy and Eunice’s church.

“The church is a one room place of worship. They claimed they took my son to the place and they were told he was a wizard,” she said.

Police sources say the suspects will be transferred to the homicide section of the state Police Command for further interrogation.