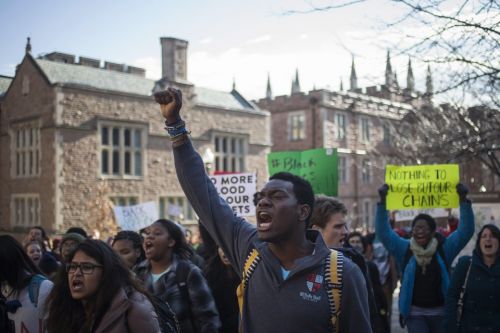 NEW YORK — There’s a new religion exploding
on the campuses of American universities and
colleges, says Thomas Cooley professor of ethical leadership at New York University, Jonathan Haidt. And if it isn’t stopped, it might
just be better to shut them all down in the next
10 or 20 years.

The religion of fundamental social justice
sweeping across college campuses is so
alarming, intense, and dripping with such
extreme liberal fundamentalism, says Haidt, it
has created an existential crisis for American
academia while punishing heretics with public shame.

“There is an extremely intense, fundamental
social justice religion that’s taking over, not all
students, but a very strong [space] of it, at all
our colleges and universities. They are
prosecuting blasphemy and this is where we
are,” Haidt warned an audience about the religion at a lecture billed “The American
University’s New Assault on Free Speech,”
organized by the Manhattan Institute in New
York City this week.

In his most recent book, The New York Times
best-seller, The Righteous Mind: Why Good
People are Divided by Politics and
Religion, Haidt, a social psychologist whose
research examines the intuitive foundations of
morality, gives an account of the origins of the human moral sense. He shows how variations
in moral intuitions can help explain the
American culture war between left and right.

“So my research is on moral judgement, moral
psychology, in my book the Righteous Mind, I
give three principles of moral psychology. And
the third principle is ‘morality binds and blinds.’
It’s just a fact that as humans, we are really
good at making something sacred. Maybe it’s a rock, tree … book, a person,” he said.

“We make something sacred, we worship it,
circle around it, often literally circling. … When
you do that, you bind yourself together, you
trust each other, you have a shared sacred
object and you go forth into battle,” Haidt said.

When social issues like racism or sexism are
treated as sacred, he says, it becomes difficult
to have honest conversations about them.

“So if that’s the basic psychology and as
religion itself has been retreating and kids are
raised in a more secular environment, then
what takes the place of that? There are lots of
sacred spaces. Fighting racism, a very, very
good thing to do, but when you come to sacred principles, sacred, this means no
tradeoffs,” Haidt said.

“There is no nuance, you cannot trade off any
other goods with it. So if you organize around
fighting racism, fighting homophobia, fighting
sexism, again all good things, but when they
become sacred, when they become essentially
objects of worship, fundamentalist religion, then when someone comes to class, someone
comes to your campus, and they say the rape
culture is exaggerated, they have committed
blasphemy,” he said.

This religion of fundamental social justice is so
frightening, even liberals are worried about it.
But they aren’t speaking up, says Haidt, who
describes himself as a libertarian.

“The great majority of people are really
alarmed by what’s happening. There is a small
group on campus of illiberal people. The
illiberal left against the liberal left. The liberal left
is uncomfortable but has so far been silent,”
Haidt said.

It is this illiberalism on campus that has given
rise to groups such as Black Lives Matter where
“nobody can say no to them.”

“No president in the first few months stood up
to the protesters, the president of the United
States, finally a few weeks ago stood up to
them,” Haidt said.

“This, I believe, is an existential crisis for our
universities. Our universities simply cannot
function if this keeps going, and the reason
why is pretty obvious,” Haidt explained.

“Human beings are incredibly irrational, biased,
imperfect creatures. We are really, really bad at
following the truth wherever it leads. The
brilliance of some of our classical liberal
institutions, especially science at the university,
is that it institutionalized disconfirmation.

“We in science, we don’t really see the truth
unbiasedly. We each put out our models, our
theories, we try our hardest to prove we are
right. And other scientists say ‘no, you didn’t
see, this is wrong’ and then we have to defend
it. That’s the way it works, institutionalized disconfirmation. It has made us as a species as
a culture vastly smarter than we could be if we
were just individuals deciding things for
ourselves,” he continued.

“So science, this is very precious, universities
are very precious. They only work if you have
enormous protections for institutionalized
disconfirmation. If I say something, if I publish
something, I have to know I’m accountable for
it because somebody, if I say something stupid or wrong, someone will challenge me and that
is gone,” he said.

In the current political and social climate said
Haidt, disconfirmation has suffered.

“If you say something stupid or unsupported
by the evidence, on one side politically, you can
rest assured that no one will dare challenge
you because they will be attacked. Conversely,
if you say something which is true, backed by
evidence and it points toward a conservative or libertarian conclusion, you can rest assured,
you’ll be challenged very harshly,” Haidt
explained.

“Now it doesn’t mean you can’t publish. Some
of us who are writing unorthodox things we
are getting published, it’s just we have to try a
lot harder. And so the net output of universities
is warped, it’s unbalanced, it’s unrepresentative
as a whole. It’s untrue,” he said. “So this is why I believe we have an existential crisis. If it
keeps going the way it’s going we might as
well just shut them all down in 10 or 20 years
because they will be worthless.”

Haidt, however, doesn’t think life will continue
down this road for American academia
pointing to a growing counterculture
movement involving projects such as the Heterodox Academy .

Heterodox academy, where Haidt is a member,
is a politically diverse group of social scientists
and other scholars who want to improve their
academic disciplines.

“We have all written about a particular
problem: the loss or lack of ‘viewpoint
diversity.’ It’s what happens when everyone in
a field shares the same political orientation and
certain ideas become orthodoxy. We have
come together to advocate for a more intellectually diverse and heterodox academy,”
the group explains.

Just this month, Haidt wrote an op-ed for The Wall Street Journal on affirmative
action arguing that there are better paths to racial justice in higher education.

He is banking on some top schools joining the
counterculture movement which he believes
will usher in a healthier kind of diversity that
protects disconfirmation instead of silencing it.

“Our idea is, what if Buddha, Jesus and Martin
Luther King were asked to come up with a
diversity reading list. What would they pick?
What would they want students to read before
they engage with people who are different?”
he asked.

“Why do you complain about the speck in your
neighbor’s eye when you do not see the plank
in your own? Wouldn’t that be a great thing for
people to read before they arrive in college?
How about Dale Carnegie? How to Win Friends
and Influence People?” he continued.

“Given that diversity training does not work or
backfires, American companies and universities
spend billions of dollars a year, on something
that doesn’t work or makes things worse. We
think there is a market for a radically different
kind of diversity training,” Haidt said. “And we can begin to disrupt this whole industry. So we
are doing all these projects to use market
forces to swamp the illiberals and basically take
advantage of people’s disgust with the current
situation.