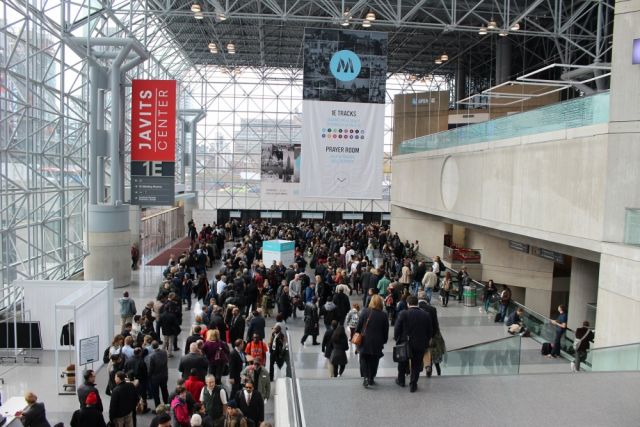 NEW YORK — Thousands of Christians from cities representing more than 90 countries around the world gathered in New York City Tuesday for the opening of the Movement Day Global Cities conference where they tackled issues under the banner of disrupting cities with the Gospel globally.

“We are gathering this morning, 95 nations from around the world. We are so thrilled that you are here. You and our being together really is a miracle,” declared the Rev. McKenzie “Mac” Pier, founder and president of The New York Leadership Center in welcoming the multiethnic, multiracial gathering.

“If there is one message for Movement Day, it’s simply this: The speed of the Gospel in a city is a proportion to the depth of unity in the same city in the body of Christ. This is a unity rooted in a common vision for our city, deeply rooted friendships, across racial, denominational lines and a passion for the next generation,” he said.

Movement Day, which was launched in 2010, is an initiative of The New York City Leadership Center, a nonprofit ministry focused on training Christian leaders to impact their cities.

Pier said 95 countries were represented at the conference which will end on Thursday, and conference officials said nearly 3,000 registered guests were expected for the conference and walk-ins could swell that number.

“God is bringing the revival of Christianity from the global south to the global north. The question for us is this: Do we understand our cities well enough to interpret how God is choreographing nations into our cities? Do we have the cultural agility to identify, celebrate and collaborate with our new neighbors? God wants to disrupt the world with the Gospel through our communities. The only antidote to the chaos of complexity of cities is simply the unity of the body of Christ. We are one loaf,” Pier told the gathering.

The event, he said, took three years of planning with the help of global partners forged through decades of relationships.

“This week you’re gonna hear this theme about how God is disrupting cities around the world with the Gospel. God has been disrupting New York City. New York City is being disrupted by the Gospel. It is not a new story. We just passed a month ago the 159th anniversary of the Fulton Street revival that began near Wall Street. And that revival spread across the United States. Within two years, 3 percent of all the people who lived in the United States were converted. Emerging from that great revival was a spiritual awakening we call the evangelical social awakening that lasted from 1865 to 1920. The Gospel disrupted our city and nation by mobilizing the Church to care for the poor and disenfranchised,” explained Pier.

“The credibility of the Gospel was so strong that more freed slaves became Christian between 1865 and 1900 than any other ethnic group in the history of North America. The Gospel disrupted our nation. For the past 25 years in Manhattan, we have seen evangelical Christianity grow by 500 percent. What is God up to in all of our cities? We live in a world needing to be disrupted by the Gospel because we live in a world of chaos,” he said.

Pier made the case for an increased focus on urban ministry by citing rapid population growth in these areas.

“Cities are growing at a breathtaking speed, 1.5 million people are moving into cities every week. This represents a new Singapore or a new San Francisco every month. All over the world. Cities in China and Africa and Latin America are exploding. The world will grow 20 percent in 20 years to more than 9 billion people, 70 percent of those persons will be living in sizable cities.

“In a few years, Africa will become 80 percent urban. Consider the refugee crisis, according to World Vision data, the refugee population has grown 35 percent in two years. This is staggering and it begs the question: How do we respond?” he asked.

The conference is expected to focus on how the Church can respond to the challenges of city ministry, such as human trafficking, poverty and racism through Gospel movements and collaborative partnerships as well as the future of this response.

“The Gospel needs to disrupt all these challenges all over the world. In the words of Tim Keller, ‘the Church, despite its growth, is not growing fast enough to the great unmet needs of our cities.’ God is disrupting the world by choreographing the nations of the world in the neighborhood of our cities. Against this backdrop of an urban world being disruptive, God is bringing nations to us. Consider places like Africa,” Pier said.

“Consider places like London where the majority of church attendees are either Caribbean or African. Consider places like Dubai where there are 400 churches representing the international spectrum. Right here in New York City 90 percent of the people who attend church are either minority or immigrant. I describe New York City not as an American city but as a very small continent made up of many countries,” he added.

“It’s very moving. The name is suitable because I feel moved. I feel like I’m being fed for the job that I have over there,” said Ama Von Pereira, a Christian from Hamburg, Germany.

“They tell you to come out of the known spaces in which we operate and join hands together with other people to experience great men of God, experience different people from different cultures. To exchange views and get encouragement and inspiration is wonderful,” she said, noting how she now has a better view of the “global movement of Jesus Christ.”

“I think it changes my perspective of what I’m doing, because maybe I saw myself as an isolated person working for God, but through this experience I’m getting a broader picture of the Kingdom of God. And it’s really moving me into different dimension,” she added.

Hillary Bercovici, a member of Trinity Church in Greenwich, Connecticut, said he was impressed by the organization of the event.

“Just getting all of us in the same room was such an accomplishment because usually our churches are distinguishing ourselves from each other. Well, we are more this way or more that way and to bring people together around the heart and core of the Gospel. That’s a powerful thing in and of itself,” he said.

“Worshiping with others, hearing from others who are from radically different cultures and backgrounds, it expands my sense of what the church really is,” he added.