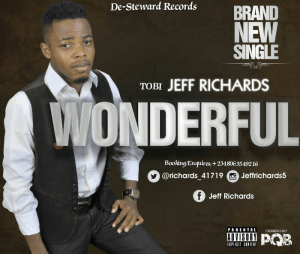 Upcoming gospel act Tobi Jeff Richards has inked a
record deal with new generation gospel record label
De-Steward Records own by Dr. Bamidele Joseph,
the CEO of Steward Group, has appointed
NOLLYWOOD Film director and publicist Saint Joseph
Ovensehi as his manager. His manager, St. Joseph Ovensehi has assured all gospel music lovers that Jeff
Richards has come with something exceptional and
that with the help of Jeff’s talent the record label will
achieve its main goal of spreading the gospel.

Oluwatobi Jeffrey Fabolu-Richards simply referred
to as Tobi Jeff Richards was (born July 8th), he is a
contemporary Christian singer, song writer and
recording artist from Osun State, Nigeria. Tobi-jeff
Richards was born into the family of four, and
began singing at the age of five, from the church choir. Jeff plays several musical instruments and
loves the Mic.

Meanwhile, DE steward records has announced on
its official Instagram page @destewardrecords that
Jeff will be on a free church tour across Africa
between the period of September to November
2016, and all churches who would love to have this
eccentric artist bring the roof down with his melodic voice can reach out to the Management by
contacting;

GOOD news to ALL GOSPEL MUSIC lovers, De Steward
Records will be giving out lots of airtime weekly on
its official Instagram page and Facebook.
So follow now on. IG @destewardrecords and @
tobijeff_richards, Twitter: @destewardrecord