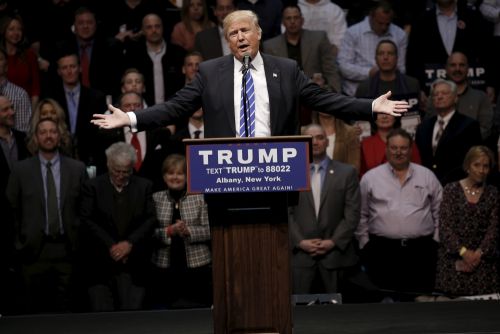 Presumptive Republican nominee Donald
Trump has called on surveillance on mosques
across America in the wake of the Orlando gay
nightclub shooting that left 49 people dead,
after news emerged that the shooter, Omar
Mateen, worshiped at a Florida mosque that has now been connected to two terrorists.

Trump told Fox News that the U.S. needs “intelligence gathering like we have never had
before,” and said that “we have to be very
strong in terms of looking at the mosques.”

He further told “CBS This Morning,” that the
Muslim community knows “who the bad apples
are, where the bad seeds are.”

Speaking of a separate terror attack in
California in December, where 14 people were
killed, Trump said:

Mateen, who killed 49 people and injured 50
others in his shooting spree at the Orlando
nightclub, the deadliest shooting in U.S. history,
reportedly worshiped at the Fort Pierce Islamic
Center in Florida. The MailOnline pointed out that in 2014, another one of its former
members, Moner-Muhammad Abu Salha,
carried out a suicide bombing in Syria, making
him one of first American citizens to be linked
to mass terror overseas.

Still, Fort Pierce Imam Syed Shafeeq Rahman
insisted there is no link between the teachings
at his mosque, and the terror acts such men
have carried out.

“This is a coincidence. There is no teaching
given about extremism in this mosque. There is
nothing coming in the sermon or the
speeches,” Rahman told WPTV on Sunday.

“The mosque did not radicalize him,” the imam
added. “If something radicalized him, it might
be the internet.”

Although the Islamic State terror group in Iraq
and Syria has claimed responsibility for the
Orlando nightclub attack, U.S. authorities are
still investigating whether there was a viable
link between the terror group and Mateen
before Sunday’s rampage.

In another speech on Monday, Trump insisted that despite the gravity of the tragedy, America
is not helpless, and measures can be taken in
the future to lessens the chances of such an
attack occurring again.

“We’re not acting clearly. We’re not talking
clearly. We have problems. If we don’t get
tough and if we don’t get smart, and fast, we’re
not going to have our country anymore. There
will be nothing, absolutely nothing left,” Trump
warned.

“The killer, whose name I will not use or ever
say, was born an Afghan, of Afghan parents,
who immigrated to the United States. His father
published support for the Afghan Taliban, a
regime who murders those who don’t share
radical views. And they murder plenty. The father even said he was running for president
of Afghanistan,” he said.

“The bottom line is that the only reason the
killer was in America in the first place was
because we allowed his family to come here.
That is a fact and it’s a fact we need to talk
about. We have a dysfunctional immigration
system which does not permit us to know who we let into our country and it does that permit
us to protect our citizens properly.”