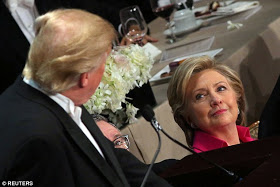 No fewer than 24 hours after they traded blows at the final presidential debate, Hillary Clinton and Donald Trump faced one another again on Thursday as they attended a white tie charity dinner.

But while Trump’s wife Melania stood by the Republican candidate as he cracked jokes about his rival, Bill Clinton was nowhere to be seen. And she could have done with the backup.

Not only could the candidates barely stand to look one another in the eye as they arrived for the Al Smith Memorial Foundation Dinner at the Waldorf Astoria hotel in New York, but Melania also had a death stare for Hillary Clinton.

Clinton, colorful in a fuchsia Ralph Lauren collection gown, had also grimaced as she passed her opponent’s wife.
Melania, who wore a sexy, black backless number, was also the source of one of the largest laughs of the evening.

The Republican had turned to his 46-year-old wife, to make light of her lifting of sections of Michelle Obama’s speech from the 2008 DNC. 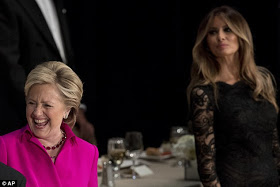 “The media has been so biased, more than ever,’ he said. Gearing up for his punchline, he continued: This is going to get me in trouble.
Michelle Obama made a speech and everyone loved it. It was great. My wife, Melania, made the exact same speech and everyone gets on her case.  Speaking over the roaring laughter of other guests, he said: ‘Stand up, Melania!”

Clinton was next, making a self-deprecating speech which poked fun at Trump’s portrayal of her as having a lack of stamina.

‘This is such a special event that I took a break from my rigorous nap schedule to be here,’ she joked. 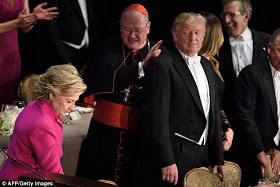 The former first lady was sat next to Cardinal Timothy Dolan at the top table of the Al Smith Memorial Foundation dinner at the Waldorf Astoria Hotel in New York. Her husband Bill was not included in the event’s seating plan.

It is not clear why the former president did not join Clinton at the event.