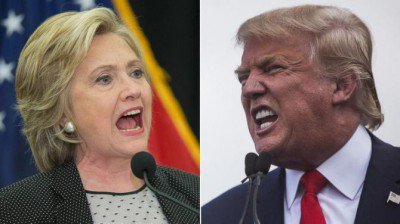 Republican presidential nominee Donald Trump
slammed Hillary Clinton as mentally unstable at a
Saturday campaign rally, seizing on her admission
that she “short-circuited” in comments about her
private email use at the State Department.

“The people of this country don’t want somebody
who’s going to short circuit up here,” Trump told
supporters in New Hampshire.

“She’s a dangerous liar,” the real estate mogul said
of the Democratic former secretary of state. “She is a
totally unhinged person. She’s unbalanced.”

Trump’s supporters chanted “Lock her up!” during
the event in the town of Windham, which was
broadcast online.

On Friday, Clinton acknowledged she “may have
short-circuited” when she tried to clarify statements
about her use of a private email server.

The Democrat had told Fox News Sunday that FBI
director James Comey said her “answers were
truthful” about whether she sent or received
classified material via private email. That comment
was branded false by Washington-based fact-
checkers.

Trump, 70, has embraced her phrasing as a line of
attack. On Saturday ahead of his rally in New
Hampshire, he posted a campaign ad on his
Facebook page that refers to Clinton as “Robot
Hillary” — and shows sparks flying out of her
mouth.

“Is Robot Hillary melting down?” the ad asks.

Trump is trying to boost his campaign after a week
of missteps that saw his poll numbers drop and the
68-year-old Clinton, a former senator and first lady,
seize the momentum.

He reversed course and endorsed House Speaker
Paul Ryan for re-election on Friday, pledging to
work with Republican Party leaders. Trump also
said he would support veteran Republican Senator
John McCain, with whom he has sparred in the past.

“We need unity. We have to win this election,”
Trump told a rally in Ryan’s state of Wisconsin.