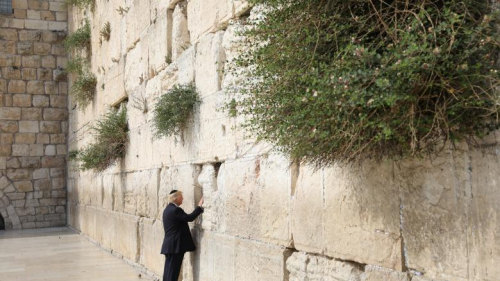 President Donald Trump prayed to have God’s wisdom as he touched the Western Wall in the Old City of Jerusalem Monday.

Johnnie Moore, a member of Trump’s evangelical advisory board and one of the leading candidates to be the U.S. ambassador for Religious Freedom,tweeted a quote from Trump: “I visited the Western Wall, & marveled at the monument to God’s presence…my hand upon the wall and to pray…for wisdom from God.”

Trump is the first American president to visit Judaism’s holiest site while in office. Prior to going the Western Wall, he visited one of Christianity’s most sacred sites, the Church of the Holy Sepulchre, which some believe is the place where Jesus was crucified. The trip to Jerusalem was the second stop on Trump’s first international trip as president.

His flight to the Jewish state was also historic in that he flew directly from Riyadh, Saudi Arabia, a flight pattern that never happens. In Saudi Arabia, he gave aspeech to leaders of over 50 Muslim-majority countries, challenging them to drive terrorists out of their lands.

The speech struck some theological notes, particularly when he said that Muslim religious leaders must urge their followers to reject barbarism. “If you choose the path of terror, your life will be empty, your life will be brief, and your soul will be condemned,” Trump said.

The faith of the 45th president has been a subject of much speculation in American political life.

The thrice-married businessman originally from Queens spoke clumsily about religion during the election cycle, infamously joking about “two Corinthians” and saying that he never asked God for forgiveness during the campaign. Yet the vast majority of white evangelical Christians, most of whom are staunch supporters of Israel, voted for him on Election Day and Trump has solicited the support and input of conservative evangelical leaders.

At the signing of an executive order protecting religious liberty earlier this month, Vice President Pence, who is known for his sincere faith, introduced Trump as a “believer” who “loves his family and loves his country with an unshakeable faith in God.”

His daughter, Ivanka, has converted to orthodox Judaism. Her husband, Jared Kushner, is Jewish.

As The Christian Post reported May 5, CP Executive Editor and Southern Evangelical Seminary President Richard Land, who dined at the White House with the president and his evangelical advisory board earlier this month, said that the president is “comfortable around evangelicals; it’s obvious that he likes us and he’s fascinated by us. I don’t think he was around people like us much before he ran for president.”

Evangelist James Robison, president of LIFE Outreach International, told CP last November that several advisers were instructing Trump to avoid certain kinds of expressions of faith, especially excessive contrition for past sins, because it will be seen as manipulative and pandering.

Trump is scheduled to meet with Pope Francis at the Vatican Wednesday. In 2013, on Christmas Day, Trump tweeted about Francis after he was elected, saying, “The new Pope is a humble man, very much like me, which probably explains why I like him so much!”