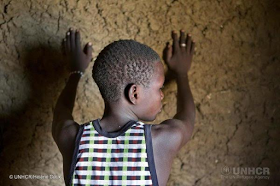 Paul (pictured) and his younger brother Adam
resisted with all their strength when several armed
men from the Boko Haram sect burst into their
house in their village, located in Borno State, and
dragged them outside.

“They ended up lifting us up and threw us
in a car. They handcuffed us, and we
remained like that for a day,” remembers
Paul from the Minawao camp, in
Cameroon’s Far North region, where he is
now a refugee with his brother and mother.

“Our abduction happened almost three
years ago but it feels as if it happened
yesterday,” he added

With the two boys handcuffed on the back seat,
the car drove towards the Sambisa forest, one of
Boko Haram’s strongholds bordering Cameroon.
The abductors quickly asked the family for a
ransom of 20 million nairas (or US$100,000) for
the release of Adam and Paul, then 12 and 14, or they would be killed.

In the forest, the brothers, who are Christians,
were forced to convert to Islam. Paul remembers
that his kidnappers kept screaming: “We will cut
your throat if you don’t convert.”

On the second day of their captivity, the boys were
forced to stand against a mud wall. Boko Haram
militants trained their Kalashnikovs on their backs
and threatened again to kill them. “Then they
dragged us to a well and I thought they would
throw us in, but they just wanted to scare us … They finally brought us back under the tree where
we had been sleeping the past night,” Paul recalls.

With no blankets to keep warm at night, little food
to eat for several days and the constant threats of
execution, the two boys kept thinking they would
die. “We were often crying. We were cold. We were
thinking how much we missed home and our
mother,” Paul said.

The two boys were told they would be trained to
become fighters – a fate that they would in fact
escape. Unknown to them, negotiations were
underway between the boys’ uncle and one of the
leaders of Boko Haram in Borno State, and they
were finally released after seven terrifying days.

Hundreds and possibly thousands of children
have been abducted in Nigeria since 2013, when
Boko Haram stepped up their insurgency. The
spectacular kidnapping of 276 girls in Chibok, in
Borno State, on April 14 two years ago made
headlines all over the world and generated unprecedented social media engagement (see
#BringBackOurGirls). Some 50 of the girls
managed to escape in the following hours and
days of the brutal kidnapping, although the fate of
the others remains unknown.

Abductions of girls and boys had been happening
long before that high-profile incident and still
occur on a regular basis. Schools and dormitories
have been raided regularly in north-eastern
Nigeria by armed men. Boys are kidnapped for
recruitment into the sect’s ranks while abducted girls will be exposed to forced marriage, sexual
exploitation and abuse.

Some families have escaped to neighbouring
countries for more safety and as a preventive
measure, although kidnappings of children have
also been reported in Cameroon, Chad and Niger.
In the past year, girls have also been used more
and more to carry out suicide bombing attacks.

“Being kidnapped or being a victim of
violence are life-threatening events that
trigger huge anxiety and distress. It will
impact enormously on the emotional world
of any child,” says Caroline Schmidt, UNHCR
Regional Education Officer for West Africa and the Nigeria situation, based in Dakar.

In refugee camps in West and Central Africa,
UNHCR, the UN Refugee Agency, and its partners
have implemented activities that support boys and
girls who have experienced violence or abuse,
and have suffered during their flight or have been
separated from their families.

They receive special assistance, including psycho-
social support and access to child-friendly spaces.
UNHCR also trains and supports teachers to ensure
that schools are safe and protective spaces where
they can regain a sense of normalcy.
It is hoped that a safe environment such as the ones provided through schools in refugee camps
and host communities will enable children and
youths to have a positive outlook on the future.

“We are refugees now in Cameroon, and
we feel safer. I miss my home in Nigeria, my
village and my friends,” Paul said, noting
the ongoing insecurity in his homeland.
“But I am still afraid of going back there
and possibly meet with the men who abducted me.”